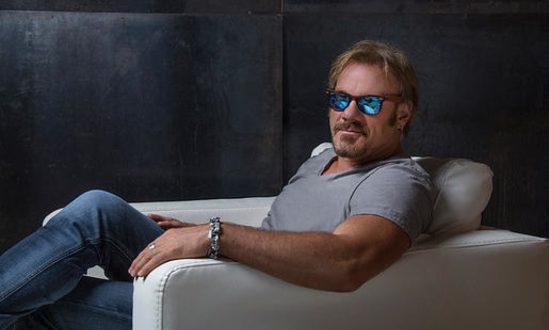 Thank you for chatting with us! Can you tell us a little about your Christmas duet with Kellie Pickler on “The Naughty List.”

“The Naughty List” is a fun little flirty Christmas song we came up with. I was sort of inspired by 40’s style big band era music. I was thinking of Rosemary Clooney doing “White Christmas,” that kind of classic, old school style.

You weren’t ever on the Naughty list, were you?

Are you visiting any cities that have special meaning to you on your Christmas tour?

Yes, we tour a lot! Mostly this tour is taking me to the Midwest and Northeast. What is actually pretty cool about this holiday tour is, I end up really close to my hometown in Virginia.

Why is performing still so vital to you at this point in your life?

Touring is something I love, it is such a big part of who I am. I think I am having more fun performing now than ever before!

Most of the gifts were sports centered back then. A football or basketball, G.I. Joe’s were popular, of course my sister always wanted a Barbie.

My favorite Christmas Movie is “What A Wonderful Life” but “Home Alone” is great too. We watched “Elf” the other night and my kids love it.

It’s usually the good ol’ turkey, ham and sweet potatoes, that type of deal. This year I might do something different, like a taco Christmas!

You have worked with so many artists in your long career.. Is there anyone that you have not worked with that you would love to collaborate with?

I would love to work with Paul McCartney, Billy Joel, or Elton John that would be awesome.

To your daughters, you’re just Dad. What fellow celebrity have you introduced them to, taken them to a show, that gave you a little bit of street cred with them?

Whoever was hot at the time, Miley Cyrus or The Jonas Brothers, that put me in for awhile. That made them clean up their room for a few weeks.

You moved to Nashville in the 90s, what do you think of the changes the city has had over the years? Do you have a favorite restaurant in town?

Nashville is evolving so much, I always like my neighborhood joints; the Green Hills Grille or Firefly. I do love some of new places like The Southern downtown, it is always good.

Tell us a little about your “Music City Light” Beer, which is one of our favorites if I must say. What got you started on that?

Some buddies I have known for years and years brought the idea to me. It’s just fun having a local Nashville beer plus I had been in the beverage industry before.

The red on the label gives it a holiday feel. Will you be giving it out as a Christmas gift to anyone?

You know what, I was thinking that!

Besides your beer, are there any other brews that are your favorite.

I love trying out local beers wherever I go.

Do you ever get into cooking with the beer?

I don’t cook a lot, I had a restaurant for years. I pretty much always eat out.

Wow, that’s a tough one. Maybe wine with Jesus or a beer with Clinton. Anyone with a great story. I’ve had drinks with many of the most amazing people of my lifetime.

ABOUT PHIL VASSAR:
Country music hitmaker Phil Vassar is a piano-pounding powerhouse on stage who taps into his audiences via social media for song requests throughout his more than 135 shows a year. Phil’s reign of signature songs include 10 No. 1 singles and 26 Top 40 hits, including “Carlene,” “Just Another Day in Paradise,” “Six-Pack Summer,” “That’s When I Love You” and many more. Vassar was racking up hits on the radio long before he even began his own recording career that has seen the release of six albums, two ASCAP Songwriter of the Year trophies, ACM’s Top New Male Vocalist and sold-out shows across the country. Vassar’s songwriting career blossomed in the mid-’90s when he landed a publishing contract with EMI and penned hits for Collin Raye (“Little Red Rodeo”), Alan Jackson (“Right on the Money”), Tim McGraw (“For a Little While”), Jo Dee Messina (“Bye Bye,” “I’m Alright”), and Blackhawk (“Postmarked Birmingham”). He signed a record deal of his own with Arista in 1998 and was named ASCAP’s Country Songwriter of the Year in 1999. Vassar continues to churn out incisive, soulful lyrics and infectious melodies that capture the heart and soul in the unique and special way that only he can.