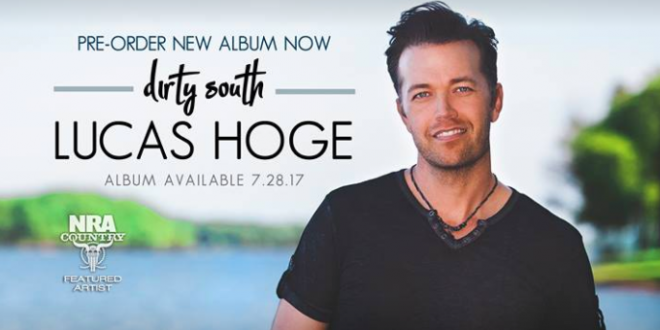 I’m sure you won’t mind me saying that your new album “Dirty South” is just fantastic.Can you give us a little bit of background about song selection and writing?

Well, first, thank you, I’m glad you enjoyed it! I love writing and selecting songs that I think will relate to the listeners. I write and select songs that connect to my life in a personal way and hope that they relate to those listening as well. I love taking people on a journey through my music and that’s why I love putting songs together that hopefully make you laugh, cry, want to party and take you back in time to a great memory.

Do you have a favorite song on the album?

Yes, one of my favorite songs on this project is a song I wrote as a tribute to my friend Micheal. We lost him at a young age and way too early. He was a great friend and person. The song is called: “Who’s Gonna Be There.”

Now that the album is out, what can we expect on the back of it? A particular single, writing for the next album?

Lots of touring to play these songs all over the country! I’m always writing and working on my live show, so that never stops. The Dirty South tour will continue thru the fall and you can expect a Christmas album this year as well! I’m always writing for the next project and I already have some contenders …one in particular called “Bad People” that the fans are reacting to when we play out on the road.

I always loved all sorts of music at a young age, and still do, but it wasn’t till I heard what Garth Brooks was doing that I really starting falling in love with country music. His music opened me up to all the possibilities regarding subject matter and how to deliver a song and then I started getting into listening to the greats like Strait, Jones, and Haggard.

Tell us about your work with Animal Planet’s Last Chance Highway. What was that experience like and do you have any dogs of your own?

I currently have two rescue dogs Tiki and Honey Bee, and a rescued cat named Camo. On Last Chance Highway, the dogs would be rescued from different places in the South and then I would help transport them to their forever homes in the Northern States. The show was so rewarding — just knowing you’re helping save the lives of so many animals and then being there when the owners met their new dog for the first time. The experience was something I’ll never forget.

What’s the best thing about being a brand ambassador for Cabela’s and what is your must have product of theirs?

The best thing about partnering with Cabela’s is just that — I consider myself blessed to have the support of a company that I have legitimately loved since I was a kid. I grew up with the brand and their stores. My uncles would constantly talk about shopping at Cabela’s and I would walk around the house with my big Cabela’s Catalog all the time. Now working with the brand and getting to know the people behind the it makes me even more loyal to Cabela’s than ever before. I consider Cabela’s my family. Favorite must-have product… it has to be the Cabela’s Pellet Grill which I’m happy to say that one is on its way to Nashville now!

There are a lot of great artists out there today but I have to say I really respect and dig Thomas Rhett’s music.

Now Let’s have a bit of fun.
What’s your favorite place to eat in Nashville?
Lunch: Jersey Mikes
Dinner : Toyama Sushi and Hibachi
Place to get BBQ? Corky’s in Brentwood
Best place to relax with a beer and listen to music: Belcourt Taps
Breakfast? Fennwicks 300
Best place for date night: In my backyard with a glass of wine and my wife
Losers or Winners Bar: Losers

What is your must have meal or snack on the road?

When out on the road, what’s your fast food of choice?

Three things you can always find in your refrigerator?

Most memorable meal while touring. Where were you and what did it involve?

It was a dish in the country Jordan — kind of like Falafel. We were in Jordan touring for our troops and they took us downtown for some local food

Garth Brooks, hands down. We would have a nice cold beer and I would ask him if I could open up all his show for 2018!

ABOUT LUCAS HOGE:
Rebel Engine artist Lucas Hoge rose to national fame as a star of Animal Planet‘s Last Chance Highway. Hoge’s disarmingly charming personality made him a favorite with viewers and TV bookers, which led to appearances on NBC’s Today show, Inside Edition and The Daily Buzz to name a few. As Music Ambassador for Cabela’s, Hoge is in good company along with fellow Music Ambassadors Luke Bryan and Justin Moore. A passionate supporter of the U.S. military, Hoge has traveled the globe extensively performing for the troops visited numerous countries throughout the Middle East and beyond for the past 8 years as part of the Wrangler National Patriot Tour. Hoge is also the Celebrity spokesperson for Guardian Angels For Soldier’s Pet. His single “Boom Boom” spent an unprecedented seven weeks at #1 on the CMT Music 12-Pack Countdown. Hoge is currently visiting radio stations nationwide in support of his new single “Dirty South.”