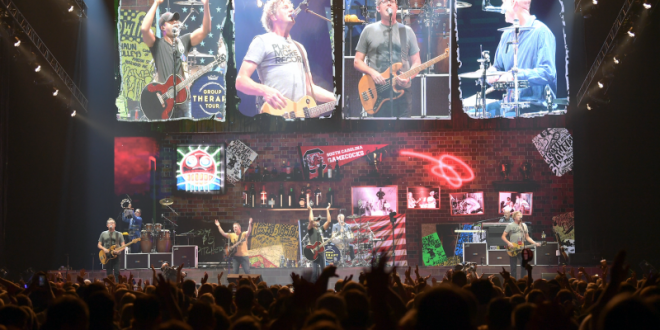 The trek coincides with the 25th anniversary of the band’s breakthrough album, Cracked Rear View, now certified 21-times Platinum, and the crowd was on their feet throughout the night singing along to the album’s classic songs “Hold My Hand” and “Time” before raising their lit-up cell phones for the GRAMMY Award-winning ballad, “Let Her Cry.”

The show also included Hootie & The Blowfish’s new track, “Rollin’,” from their upcoming studio album, Imperfect Circle, due out November 1. Lead singer Darius Rucker’s solo country hits “Alright” and “Wagon Wheel” dotted the setlist along with Hootie fan favorites “Running From an Angel” and “I Go Blind.” Rucker called R.E.M. “the band that made us want to play music” before paying tribute to them with a cover of “Losing My Religion.”

Towards the end of the night, Hootie welcomed show openers Barenaked Ladies onstage for a cover of The Beatles’ “I Get By with a Little Help from my Friends.”  For the encore, the band treated fans to an intimate performance of “Goodbye” before bringing the energy back up with a little bit of Kool & the Gang’s “Get Down on It” mixed into their final song, “Only Wanna Be With You.”

Hootie & The Blowfish’s Group Therapy Tour continues with a three-night stand in the band’s hometown of Columbia, S.C. on September 11, 12 and 13 before the band takes their show to the U.K. & Ireland next month.

Music editor for Nashville.com. Jerry Holthouse is a content writer, songwriter and a graphic designer. He owns and runs Holthouse Creative, a full service creative agency. He is an avid outdoorsman and a lover of everything music. You can contact him at JerryHolthouse@Nashville.com
Previous Brantley Gilbert And Wife Welcome Second Child
Next Stars Joins Forces To Raise Money For Hurricane Ravaged Bahamas