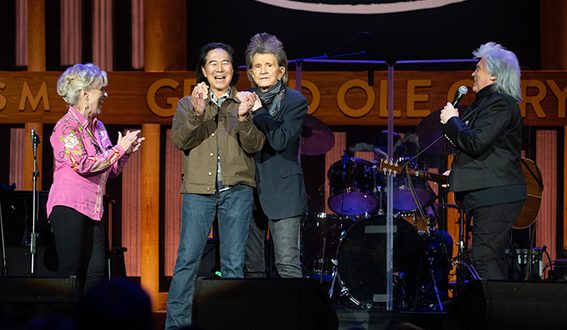 Comedians Henry Cho and Gary Mule Deer were each invited tonight to become members of the Grand Ole Opry by their longtime friend Marty Stuart. Cho and Mule Deer were surprised backstage during a Facebook Live interview with Stuart discussing the storied history of comedy on the Opry. The two comedians have each played the Opry more than 100 times and will be the first comedians inducted as members of the Opry since comedian Jerry Clower became an Opry member 49 years ago.

During the night’s Opry at the Ryman performance, Opry member Connie Smith welcomed Stuart to the stage to introduce the two as future Opry members. The comedians’ induction dates will be announced soon.

“Marty, Henry, and Gary said it best themselves when they were talking before tonight’s invitation,” said Opry Executive Producer Dan Rogers. “Comedy has been an integral—and more importantly, FUN—part of the Opry for decades. It’s going to be fabulous to have both Henry and Gary as Opry members and for many of their fellow comedians on Opry shows to keep ratcheting up the fun factor every night.”

Music editor for Nashville.com. Jerry Holthouse is a content writer, songwriter and a graphic designer. He owns and runs Holthouse Creative, a full service creative agency. He is an avid outdoorsman and a lover of everything music. You can contact him at JerryHolthouse@Nashville.com
Previous Dolly Parton, Belinda Carlisle, Cyndi Lauper, Gloria Estefan & Debbie Harry Team Up
Next Big Loud Records Signs Singer/Songwriter Griffen Palmer