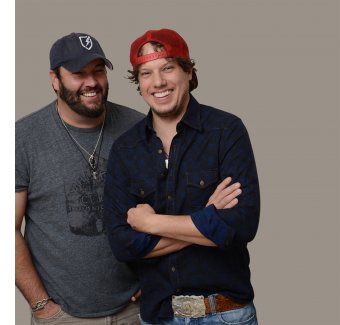 Country music duo Halfway to Hazard announced today they are hosting a Hurricane Harvey relief telethon later this week.  This Thursday, September 7at 3 PM ET the group will appear live on Kentucky CBS affiliate station WYMT-TV to solicit donations for those affected by the historic flooding in Texas. The telethon will broadcast from the Mountain Arts Center in Prestonsburg, Kentucky. Halfway to Hazard’s Chad Warrix and David Tolliver will not only host the event but will also perform their career hit songs, as well as tunes from their most recent album REDemptiOn.

“We just want to do our part and show Houston and the affected areas that Kentucky cares about them,” says Warrix.

Tolliver adds, “In these times, it’s great to see everyone come together to help out their fellow Americans.”

The telethon will also feature live music by members of the Kentucky Opry as well as select performances from other artists from the Bluegrass State.

Halfway to Hazard’s Warrix and Tolliver are no strangers to giving back. They’ve raised over $1 million for Kentucky charities alone and continue to be involved in worthy efforts not only in, but outside of the state as well.

About Halfway to Hazard

Halfway to Hazard is an American country music duo composed of singer-songwriters David Tolliver and Chad Warrix. Though Tolliver and Warrix grew up in different towns in southeastern Kentucky, their group originated in Hazard, Kentucky, which was halfway between their hometowns. The group’s debut album, Halfway to Hazard, peaked at #14 on the Billboard Country Albums chart, landing them a Top 20 album straight out of the gate. Byron Gallimore and country music superstar Tim McGraw co-produced the project. Included on the album was their debut single, “Daisy,” which earned them a Top 40 hit on the Billboard Hot Country Songs chart in 2007. As a songwriter, Tolliver has penned songs that were later recorded by Tim McGraw, Brantley Gilbert, Jerrod Niemann, and more.

For more information on Halfway to Hazard, visit halfwaytohazard.com.