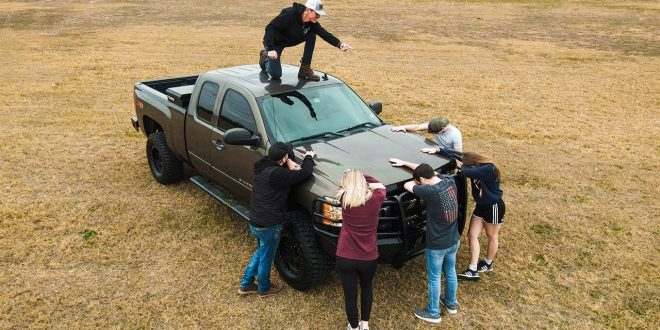 Granger Smith Gives His Truck To Fan In Need

As Granger Smith rounded out the release of his Top 5 Country album Country Things, he wrapped his contest to give away his very own truck. The Country star held the contest at the Yee Yee Farm where the five qualifying contest winners competed for the grand prize. The goal was to be the last to remove their hand from the truck, which posed as a challenge as the participants withstood 24 hours of cold, rain, and declining an onslaught of enticing offers. The truck couldn’t have gone to a better recipient as it went to ‘Mark from Wisconsin’ who was in need of a new vehicle for his family back home. The runner up, ‘Lauren from Ohio,’ stood toe to toe all night and finally accepted an offer to go on tour for a weekend with Granger in 2021. This really was a win-win for the both of them! Check out the contest recap video below!


Country Things has already started shining its resonance with fans old and new as the songwriter’s 10th studio album has already sold over 10,000 physical copies in a climate where physical unit sales have been dwindling year by year.

Music editor for Nashville.com. Jerry Holthouse is a content writer, songwriter and a graphic designer. He owns and runs Holthouse Creative, a full service creative agency. He is an avid outdoorsman and a lover of everything music. You can contact him at JerryHolthouse@Nashville.com
Previous K.T. Oslin Passes At 78
Next WATCH: Jimmie Allen, Louis York, The Shindellas – “What Does Christmas Mean”