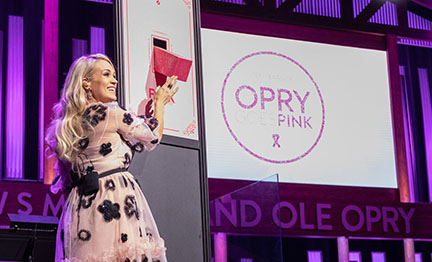 The Grand Ole Opry partnered with Susan G. Komen Foundation last Friday as part of the special two-show 10th Edition of Opry Goes Pink. Opry member and Capitol Records Nashville’s superstar Carrie Underwood, who flipped the switch on the inaugural Opry Goes Pink in 2009, returned to flip the switch on the Opry’s signature barn backdrop, turning it pink to celebrate survivors and raise awareness for the fight against breast cancer.

Underwood and others including artists and breast cancer survivors Anita Cochran, Karen Mills, and Rita Wilson (who just made her Opry debut Tuesday night), as well as Ronnie Milsap, Riders In The Sky, and more performed in support of breast cancer awareness and raised funds for Susan G. Komen’s Nashville chapter. Gone West featuring Colbie Caillat made their Opry debut on the special show.

“Every time I get to step out on the Opry stage is an honor, but tonight was extra special. When I flipped that switch and saw the Opry barn light up pink, it was just overwhelming and powerful knowing what the night meant for so many women,” said Carrie Underwood. “It was so beautiful to see so many survivors in the audience and backstage, and to be able to celebrate them and their fight.”

The evening kicked off with Anita Cochran cutting a pink ribbon and leading a pink carpet walk into the Grand Ole Opry House. Breast cancer survivors and members of their support networks were followed by fans on the carpet, all pledging to support the fight against the disease.

The Opry is donating $5 from each ticket sold since the announcement of tonight’s shows to the Susan G. Komen® Foundation.

Music editor for Nashville.com. Jerry Holthouse is a content writer, songwriter and a graphic designer. He owns and runs Holthouse Creative, a full service creative agency. He is an avid outdoorsman and a lover of everything music. You can contact him at JerryHolthouse@Nashville.com
Previous “The Sam Bush Story” To Be Released On Nov. 1
Next Thompson Square Write Children’s Book Inspired By Their Son