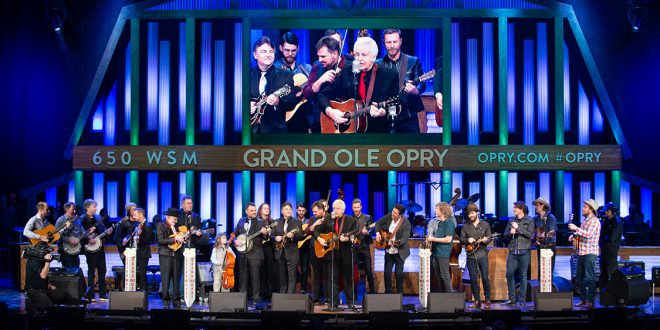 The Grand Ole Opry honored Opry member and beloved bluegrass legend Del McCoury in celebration of his 80th birthday with a special “Grand Del Opry”show last night.
McCoury, who turned 80 on February 1, was joined on stage by members of his award-winning Del McCoury Band plus friends including Dierks Bentley, Sam Bush, Bela Fleck & Abigail Washburn, Vince Gill, Old Crow Medicine Show, Jesse McReynolds, Marty Stuart, and The Travelin’ McCourys. Additional entertainers including Charlie Daniels, Ed Helms, Patty Loveless, Steve Martin, The Punch Brothers, Paul Simon, Ricky Skaggs and Keith Urban sent birthday wishes via videos played on the Opry’s barn screen.
Following his on-stage collaboration with Bentley as most of his friends who had appeared throughout the night came back on stage for an all-cast performance, McCoury addressed the crowd with a smile, saying, “I’d like to take this opportunity to thank all you folks for helping me celebrate my birthday. I’ll tell ya!”
McCoury first played the Opry in 1963 as a member of Bill Monroe’s Blue Grass Boys. Countless albums, festivals and awards later, McCoury, by then heading his Del McCoury Band (now the most awarded band in bluegrass), became an official Grand Ole Opry member in 2003. He was invited to join the cast while accepting an International Bluegrass Music Association Award for Entertainer of the Year, an award he has won nine times. In 2011, he was elected to the International Bluegrass Music Hall of Fame. McCoury’s own festival, DelFest, is entering its 12th year and has become one of the premier string band events in the country, regularly listed as one of the top 5 must-see festivals in the country. DelFest has featured artists ranging from Vince Gill and Dierks Bentley to String Cheese Incident, Trey Anastasio, and Richard Thompson, and of course a fan-favorite each year, The Travelin’ McCourys, the group spawned to carry on McCoury’s legacy for decades to come.

Music editor for Nashville.com. Jerry Holthouse is a content writer, songwriter and a graphic designer. He owns and runs Holthouse Creative, a full service creative agency. He is an avid outdoorsman and a lover of everything music. You can contact him at JerryHolthouse@Nashville.com
Previous Will Muse Raises $35,247 For Make-A-Wish
Next Ryman Auditorium Wins 9th Consecutive Theatre of the Year Award