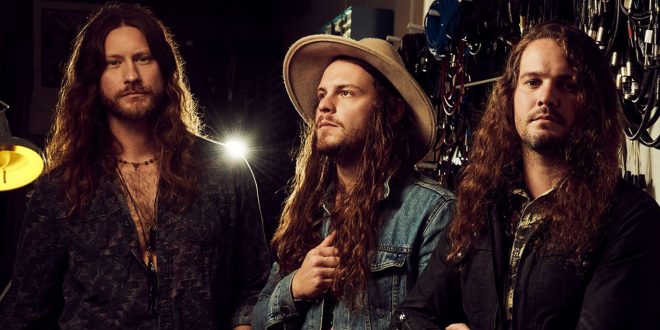 Goodbye June’s resolute spirit defines Secrets In The Sunset. Within the span of two years, they lived through a dramatic series of ups and downs, placing them on both sides of the spectrum. As they entered Black River Studios with producer Bobby Huff, the three-piece drew on “this turning point of joy and heartache” to record the five-song collection.

The band kicked off the sessions by recording the title track “Secrets In The Sunset.” Airy guitars reverberate under Landon’s hypnotic howl over subtle orchestration. The energy curls towards a sweeping refrain upheld by thunderous riffing and spirited soloing. The song opened the creative floodgates as the guys recorded “Blindly Follow Blindly” under the influence of a flurry of inspiration. Taking dead aim at hypocrisy, its spacey fretwork brushes against Landon’s explosive delivery during the chorus. Meanwhile, songs like “Live In The Now” transformed into something of a mantra for the band. A pastiche of slide, acoustic, and electric guitar, the psychedelic sonic framework gives way to an overpowering hook that’s as hard-hitting as it is harmonious.

Music editor for Nashville.com. Jerry Holthouse is a content writer, songwriter and a graphic designer. He owns and runs Holthouse Creative, a full service creative agency. He is an avid outdoorsman and a lover of everything music. You can contact him at JerryHolthouse@Nashville.com
Previous Rita Wilson Makes Grand Ole Opry Debut
Next “The Sam Bush Story” To Be Released On Nov. 1