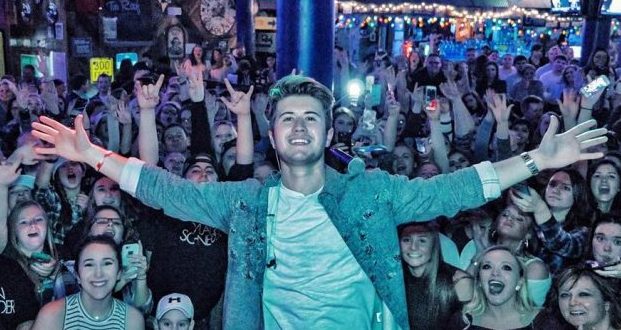 Getting to know Dylan Schneider

Talk to us about the songs on your most recent EP “Spotlight’s On You”, that released in April.
“Rockstar” was the first one that we put out, it came out with the pre-order of the EP and that one was written by Thomas Rhett, which was a very cool experience for him to allow me to cut that-I was very thankful for it. I also wrote two songs off of the track list, “Grew Up Slower” and “You I Used to Know,” and “Grew Up Slower” is about where I am in life and realizing not to take things for granted because one day you’re going to look back and realize that you wish you could do these things again and wish you would have grown up slower. I absolutely love that idea and we had a good time writing that one. And then “You I Used To Know” was written with Aaron Eshuis, who actually produced my last project. I absolutely love that song, it’s been doing really well out on the road. We’ve also got “Fireworks” and “It’s A Guy Thing”; “Fireworks” was one that I heard and absolutely fell in love, it’s a good summer jam and good to have out right now. “It’s a guy thing was one that I heard and I was like, ‘that is such a good idea and it has such great lyrics.’ It was written by one of my buddies Nate Kenyon, who sent me a few songs recently, and when I heard it I fell in love with it. It talks about everything that’s a guy thing; there’s one part that goes ‘ask me if I give a damn that all your friends are dudes, I’m gonna swear I don’t even though I do.”

You’ve worked with big name artists fairly early on in your career—talk about what their influence and guidance have meant to you/done for you.
It means a lot, I’ve met several very cool artists that I never thought I would get to meet and they’re so supportive, a lot of them very, very cool. One of my favorites to work with recently is Granger Smith; a great dude a great role model, a good person to look up to because he’s just a down to Earth dude and a really good person. I am very thankful for his relationship. He has not pranked me yet.

What was it liking filming the video for “You Heard Wrong?”
That was a good one, it was cold outside I remember that-it was really windy. I worked with a company called Vibe Nashville, which my buddy Randy is the owner of, and he does a lot of the shooting. We went to the top of (I think it’s) the Fifth Third Bank for one of those scenes, it was pretty crazy and really high up. It was a lot of fun and I met some good people, it is probably my favorite music video that I have.

Did this song come from a real life experience?
That song, no. That was the first one that I put out back in July of last year and it was written by Jordan Schmidt, Bill Weatherly, and Cole Taylor. I heard it and we were really trying to narrow down what I wanted to do because this was going to be the first one we were going to put out and we wanted to do something good, so when I heard that it was so hard to narrow down, but I loved that one.

Who are you dying to work with?
Man, I would love to work with Brett Eldredge. He’s a huge inspiration to me and the reason why I started doing this country music thing, so if I ever got to work with him on a song that would be amazing.

What other hobbies do you enjoy when you need to unwind on the road?
I love to play basketball whenever I get a chance and whenever there’s a basketball goal I like to go out and play a couple of games.

What are you listening to these days?
Lately I have been listening to a lot of Bruno Mars, Justin Bieber, I’m a huge hip hop fan. I like Travis Scott and I like the old school Florida Georgia Line from 2012.

You have an impressive fan following online. What is it that keeps your fans engaged the most?
I try to be as active as possible and get back to them on Snapchat, and when they send me direct messages I try to respond to as many as I can. It’s really important to keep that relationship because I am still independent if you don’t have anybody backing you, what you do have backing you is the fans.