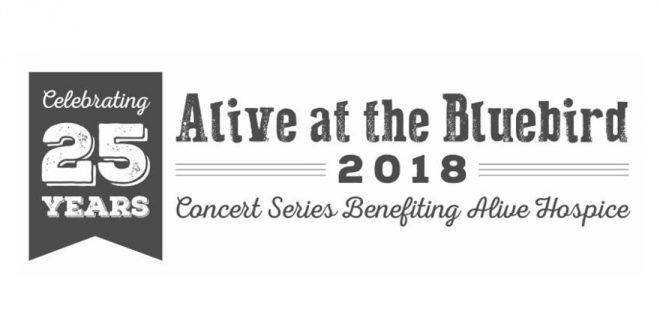 GARTH BROOKS TO PERFORM AT 25th ANNUAL ALIVE AT THE BLUEBIRD

The 25th Annual Alive at the Bluebird concert series benefiting Alive Hospice has seen sold out shows virtually every night since the kick off last week. Today, organizers announced the reigning CMA Entertainer of the Year Garth Brooks will join Kent Blazy, Pat Alger, Victoria Shaw and Tony Arata for an Alive at the Bluebird show at 9:00 p.m. on Thursday, February 1, 2018. Seats for the very special performance are $250.00, and pre-paid advance reservations can only be made through www.bluebirdcafe.com beginning Thursday, January 18 at 8:00 a.m. Central.

Brooks’ history with the Bluebird Cafe has been well documented. Capitol Records A&R executive Lynn Shults was in the famed 90-seat club on a night when Brooks performed in 1988. Brooks was signed soon after, and the rest, as they say, is history.
“…so, what do I owe the Bluebird…I owe everything I have,” Brooks confessed in the trailer for Bluebird: The Movie about hearing Tony Arata perform his eventual smash hit “The Dance” at the Bluebird Cafe.
“We are tremendously grateful to the songwriter community for the steadfast support of Alive at the Bluebird for 25 years,” said Alive Hospice President/CEO Anna-Gene O’Neal. “Garth started his career in the intimate company of these dedicated professionals, and so we are thrilled that he can join us for this special anniversary year.”
Country superstar Clint Black has been added to the round with Victoria Shaw, Roger Cook and Bob DiPiero at 6:30 p.m. on Saturday, January 20. Mark Irwin and Josh Kear will join The Warren Brothers on January 17, and Payton Smith as been added to the round with Phillybilly, Carlton Anderson, Marv Green at 6:30 p.m. on Saturday, January 27.
Admission for most Alive at the Bluebird shows follows the standard Bluebird Cafe reservation policy. Tuesday, Wednesday and Thursday shows are available at 8:00 a.m. one week prior to the posted show, and weekend shows may be reserved on the preceding Monday beginning at 8:00 a.m. atwww.BluebirdCafe.com. Please refer to the same website for admission pricing.
More than 130 artists and songwriters are scheduled to perform at least 27 Alive at the Bluebird shows in January on Tuesdays, Wednesdays and Thursdays at 9:00 p.m., Fridays at 9:30 p.m. and Saturdays at 6:30 and 9:30 p.m. The current schedule of performers is attached and is subject to change. Presenting sponsors for the event include Bass, Berry & Sims, Cigna, HCA, Hub International, Jackson National and Tennessee Oncology.SouthComm and WSM-AM return as media sponsors.
Two special items have been donated to Alive Hospice to be auctioned during the 25th Annual Alive at the Bluebird concert series. A beautiful original “Wings to Fly” oil painting donated by acclaimed artist Deann Hebert and an Epiphone FT-100 acoustic guitar donated by Earl E. Owens, a prominent Nashville manager, producer, promoter and public relations executive who was cared for by Alive Hospice last year. The guitar will be autographed by all artists and writers performing during the Alive at the Bluebird series, and both items will be available for bidding online atwww.bluebirdcafe.com and in person on the final night of the series.
The Bluebird Cafe opened in June of 1982 and has been celebrating its 35th anniversary with special shows and events.Bluebird: The Movie, an in-depth documentary about the influence the tiny 90-seat venue has had on singers, songwriters and popular music in general, is currently in production.
About Alive Hospice: Alive Hospice is a 501(c)(3) charitable nonprofit that provides compassionate care and support for terminally ill patients and their families, grief support for adults and children, and education about the end of life. Alive Hospice was founded in 1975, making it the first hospice program in Tennessee and the Southeast, and the first in the nation to provide hospice care in private homes. Alive Hospice is accredited by the Joint Commission and is a 501(c)(3) charitable organization. For more information, call 615-327-1085 or visit www.AliveHospice.org.
Alive Hospice’s Mission: We provide loving care to people with life-threatening illnesses, support to their families and service to the community in a spirit of enriching lives.