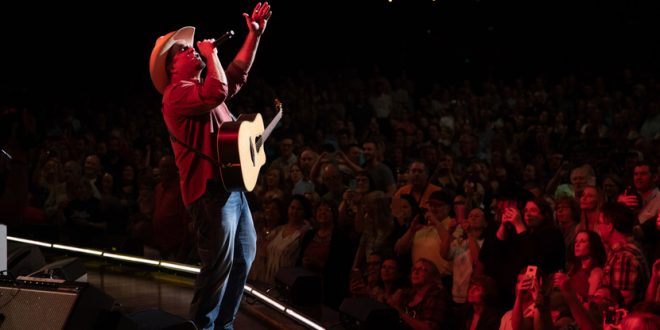 Garth Brooks at the Grand Ole Opry in Nashville, TN

Garth Brooks performed during two sold-out shows at the Grand Ole Opry on Saturday night, delivering what Opry staff members believe to be the first-ever encore performance after the Opry House’s big red curtain had been lowered to end a show. A few minutes after the night’s second show had concluded, the sellout 4,400-plus fans in attendance were still in the auditorium chanting for more from show-closer Brooks.  Hearing the roar of the crowd from backstage, Brooks and band obliged. The show went back on the air, and the curtain went back up for several more Brooks favorites, including the encore lead-off, “That Summer.” Following several other favorites including a cover of George Strait’s “The Fireman,” the Opry member and reigning CMA Entertainer of the Year ended his two-show Opry night with the classic “The Dance” before shouting, “Thank you guys for one of the coolest freaking nights of my life!”

Music editor for Nashville.com. Jerry Holthouse is a content writer, songwriter and a graphic designer. He owns and runs Holthouse Creative, a full service creative agency. He is an avid outdoorsman and a lover of everything music. You can contact him at JerryHolthouse@Nashville.com
Previous Kenny Chesney Closes 2018 “Trip Around the Sun Tour” In Boston
Next Garth Brooks To Play First-Ever Concert At Notre Dame Stadium