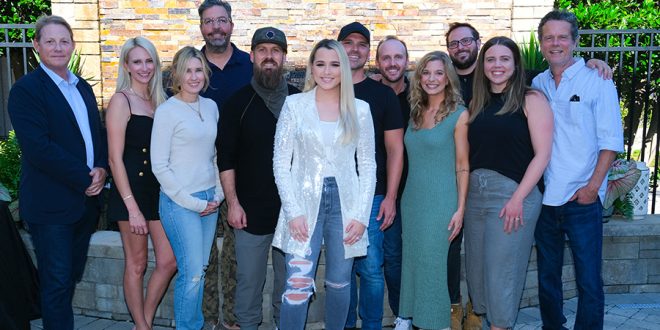 “Everyone has been so unbelievably supportive and kind to me since I’ve been in Nashville,” shared Barrett. “I really have to thank the Lord Jesus above for his graciousness, for shedding his blood for me and allowing me to do this as a job. It’s unbelievable and it’s more than I deserve.”

Extending gratitude to her family, management, label, co-writers, Country radio and more, Barrett added, “So many people have made my life here. I’m excited to be making Country music in this generation right now.”

PLATINUM-certified “The Good Ones” (penned by Barrett, Kale, Emily Landis and Jim McCormick; produced by Kale and Copperman) was a three-week #1 at Country radio, also topping Billboard’s Hot Country Songs chart for four weeks. Earning Barrett more hardware, “The Good Ones” was named Female Video of the Year at the 2021 CMT Music Awards. Adding to an already special moment, “The Good Ones” marks Landis’ first-ever #1 song, while “I Hope” and “The Good Ones” are Kale’s first two.

Making last night even more memorable, her #1 celebration falls almost exactly one year after the release of her debut album, GOLDMINE. Since its 2020 release, Barrett has been named the ACM New Female Artist of the Year, Top Country Female Artist at the Billboard Music Awards and Best New Country Artist at the iHeartRadio Music Awards.

After performing at Brooklyn Bowl in Nashville last night, Barrett will return to the road this summer for headline shows, fairs and festivals – including the all-genre iHeartRadio Music Festival on September 18.

Music editor for Nashville.com. Jerry Holthouse is a content writer, songwriter and a graphic designer. He owns and runs Holthouse Creative, a full service creative agency. He is an avid outdoorsman and a lover of everything music. You can contact him at JerryHolthouse@Nashville.com
Previous Jackson Browne To Lead Conference Panels at Americanafest
Next LISTEN: Toby Keith’s “Old School” Out Today