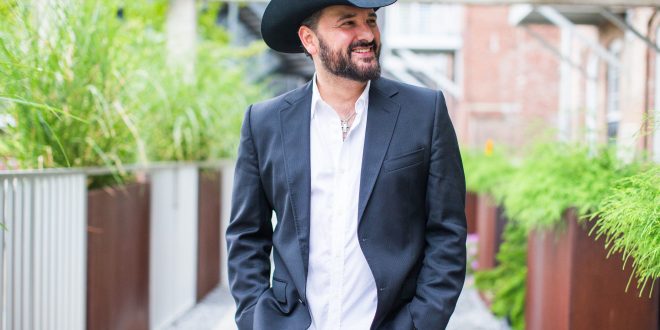 Congratulations, this is your 68th Grand Ole Opry appearance, tell us all about that. How does it feel?

” It’s awesome. The Opry has been treating me like family for a while, but it’s still a pinch me moment every time I walk out there.”

What other iconic venues would you like to perform?

I’ve played a number of theaters and the names are escaping me at the moment, but I really love playing the theaters. The old style kind of places. Like here at the Opry, you tend to have more of a captive audience where people are really listening. My music is very lyrically specific and you have to pay attention to what I’m saying. It’s always nice that you’re not trying to cut through the noise and people are really paying attention.

If you could perform a duet with anyone on the Opry, who would you choose?

You know what, I’ve always loved Patty Loveless. She’s always been my number one. If we could coax her here to get a little duet going, that’d be awesome. I’d probably freeze up out there.

Does any specific Opry memory stand out to you?

Well, it’s kind of a long story..I tell this story on the Opry sometimes and as a matter of fact, I may tell it tonight. I was asked to stand in about 10 or 11 years ago with the Tennessee Two, now Tennessee Three, the night they were inducted in the Musicians Hall of Fame. I stood in and sang a couple of  Johnny’s songs – so it was a huge honor, but that night Vince Gill was there singing with The Wrecking Crew, and Garth was there and a few other people…I’m name dropping here but anyways, after Vince was done singing I walked up to him and said “Man Vince, I sure wish I could sing like you,” and he said, “Raymond, there would have to be a very unfortunate accident.” Well fast forward to earlier this year, we were at The Ryman and since Vince was there I decided to share that story. I didn’t know he was backstage, but while I started telling the story, it caught his ear. So Vince walks out just in time and does a little scissor motion right in front of my mid-section, that was fun and a really memorable moment. I got a little cracked up and had to compose myself.

I’m sure you won’t mind me saying that your new album “Guitar For Sale” is just fantastic.

Well thank you! Did you actually listen to it?

I did! Can you give us a little bit of background about song selection and writing?

It wasn’t a record that I sat down specifically to write from start to finish. I don’t really know if I’ve ever done that, where I have a particular focus in mind. I just write songs and this situation was no different. I just sat down – well, it was a little different in the sense that I had a few songs in my back pocket for a number of years that I hadn’t recorded yet that I’ve always loved and for whatever reason they hadn’t made it onto a project up to this point. The last couple of albums I did were recorded in the box, which basically means we tracked them one track at a time. Some of the songs on this album, I felt, like deserved or needed and called for more of a live band feel. We recorded this album with a live band for the most part, and a couple of the tracks are just acoustic. It’s just a hodge-podge of old favorites. One of them dates back to 15 years ago and one of them is a song that Randy Travis recorded and it was actually his follow-up single to, “Three Wooden Crosses.” It didn’t do as well, but it’s still one of my favorite copyrights, and after years of it lying there without any activity I thought man I need to record that myself.

You’ve received some great praise about the album from tons of music outlets. That must have felt pretty special?

Yeah, you know it’s funny, you realize there are going to be critics out there and I’ve been lucky over the years…they’ve been pretty nice to me. But that can spoil you a little bit…you hope that this isn’t the one where they rip you a new one! But so far it’s been good. It’s a traditional sounding thing for the most part, although it does infuse a little rock influence and what I grew up on. I’m pretty tickled at the fact that folks seem to be liking it.

Now that the album is out, what can we expect on the back of it? A particular single, writing for the next album?

Well, the first single on the record we released is called “Livin’ This Way” and it’s also the lead off track of the album, so it’s been out a few weeks now. We will see what’s next! We had a big release during CMA Fest and I’m heading out tonight after the Opry for a five day show run, which is a lot but the plan is to just keep moving forward. We will figure out what feels right for what comes next. Maybe we will shoot a video for something you’ll just have to wait and see!

Well, it was either that or go to prison! hahaha No, my dad was a singer and still is. He likes to sit in his living room chair and sing. I grew up hearing him sing in local bands, so it was something that was bred into me early. It’s all that you heard in my house for the longest time. It wasn’t until I started hanging out with the neighborhood kids a few years later that I started hearing much rock-n-roll. I was influenced by both, but I was mostly influenced by country and a lot of what was coming out of the 70s. I’m still trying to grow up. It’s been a long journey!

Oh Gosh, you know, there are a few out there that I really dig. Jamey Johnson is a good friend of mine. I’m actually playing with him in Wichita tomorrow night. He’s in my opinion, the most authentic guy out there and he has his own career going without the help of a major label these days. He is still going strong because he’s built a following on something tried and true and that’s basically all I am trying to do. He and I came up together and we had a few different breaks in one way or another in the big label business and it led us to where we are now. I think Chris Stapleton has awesome talent. He transcends genres in my opinion. As far as mainstream goes, I’ve always liked Miranda Lambert because she seems to be able to do whatever she wants to do. It’s funny, the female artists, although they seem to have a little more trouble with radio, tend to be the ones that push the envelope a little more. There’s quite a few out there that I dig. I’ve always loved Alison Krauss.

You’ve met a lot of musicians during your career. Who has made the biggest impact on you and why?

We just lost a legend here in this town, Norro Wilson. Norro was the guy who first discovered me way back when I first got to town in the mid or late 90s. Norro was given a little cheap demo tape that I recorded by the head mechanic at the marina where I worked. Norro used to keep his boats there and get them worked on. Long story short, Norro liked what he heard and brought his buddy Ken down and the two of them had just started making records together. They came and pulled me out from underneath the boat I was working on and literally said, “Hey, we would like to meet with you,” so they opened the first doors for me and got me a development publishing deal. So I would say they have been the most influential. Tom Collins as well. Tom’s a character, he was a great song guy. He taught me to be hard on my songwriting and learn the difference between a good idea and a great one. I have done a lot along the way, songwriting wise and I look at people like John Prine, Steve Earle, and a lot of the country writers here in town. I’ve taken a little bit from each of them.

Now Let’s have a bit of fun.

Whats your favorite place to eat in Nashville?

For one thing, there are too many places I can’t decide. The funny thing was, it used to be the Longhorn years ago…that was the gathering place for everybody on Music Row. It was like our office away from the office. But now there are so many different places. Sometimes I just assume to go to Carrabba’s. I moved to Hendersonville a couple of years ago and since then there have been a lot of places open. There’s one place in East Nashville called Two Ten Jack that I like a lot. They have the best ramen that I’ve ever had in my life. I’ve had a lot of other places in North Carolina and Ohio recently and it just doesn’t compare.

I hate to be cliche and say Tootsies, but that’s what I would probably say, especially ones that I’ve been in and out of. It’s gotten a little bit too commercialized. They lose their old charm…But I’m sure they are making money and I’m happy for them, but it isn’t what it used to be.

Place to get BBQ?

I like Jacks, I like Martins, but I love this place called Peg Leg Porker. They have the best dry rub!

Hattie B’s is good but Prince’s original…thats the best.

There’s a new place downtown that I first discovered in Destin, FL called Another Broke Egg. That place is absolutely delicious. No other place in my opinion comes close. I used to love going to Noshville for breakfast, but they closed the one in Midtown.

Movies. Honestly, that’s kind of our getaway. Maybe a meal, but not even so much going to restaurants, we like to get takeout more than that these days. For takeout, there’s one place that I love in Hendersonville called The Lost Cajun. I get the jambalaya, which is a little different than most. It has more of a browner sauce and they have the best lobster bisque I’ve ever had. I take the lobster bisque and pour it on top of that jambalaya. It’ll make your toes curl!

About Ray Scott:
Ray Scott has built up an impressive career over the past decade. His 2005 debut album My Kind of Music racked up sales of over 100,000 units, and became the # 1 Country Album on the BillboardHeatseekers chart, and his “Those Jeans” single has sold over 300,000 copies – all from the song’s exposure on SiriusXM. He has tallied four No. 1 singles in the United Kingdom, accounted for over one million Spotify streams, and over 711,000 new views on YouTube. Scott has also performed on the stage of the Grand Ole Opry over sixty times in his career. The entertainer has also tasted success as a songwriter, with cuts from superstars Trace Adkins, Clay Walker and Country Music Hall of Fame member Randy Travis to his credit.

Previous For Dr Pepper and Brett Eldredge, Delighting Music Fans is Somethin’ They’re Good At
Next Grand Prix may be coming to Nashville in 2019