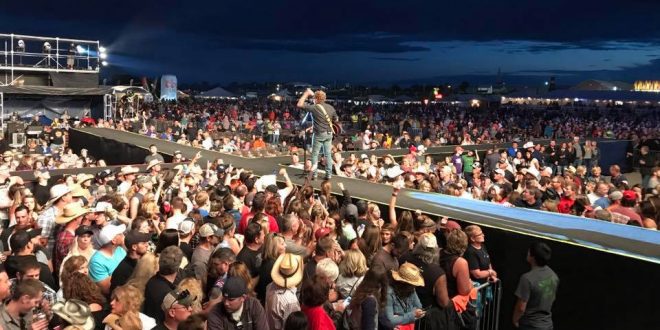 Joe Denim gives fans in the Nashville area three opportunities to see him this summer! He has a summer residency at Fontanel on their Back Porch Stage. It’s aptly named Joe Denim & the Hillbilly Soap Opera’s Porch Party series, and Joe invites special guests to play during each show, along with his band, which includes background singer Vanessa Mandrell, who grew up on the very porch they perform on. The shows are the first Friday of each month,  July 7, August 4, and September 1st. Doors are at 5:30 each night, music from 7:00 – 8:30. We caught up with the singer/songwriter to tell us a little more about the Porch Party Series and some of his Nashville Favorites!

Tell us about your summer residency at Fontanel.
It’s a real cool thing we are doing at the Fontanel on their Back Porch Stage the first Friday of the month. It’s really turning into something great. It’s pretty much people I know, believe in, and think are great that more people need to hear. We just all play well together. July it’s Marti Dobson, who writes some great songs. The whole thing is about getting out and playing songs you don’t usually hear in Nashville.

What is your favorite thing about playing this venue.
I like the openness of it. You can bring lawn chairs and sit in the creek if you want, or the grass, there’s a bar, on stage and we have our friends coming out. It’s not like a Nashville, downtown on Broadway gig. It’s more of a jam and pickin’ thing – totally laid back.

Where did the name Hillbilly Soap Opera come from?
That’s pretty much my little idea of what we do with the stage set. We don’t have a whole stage set up on the porch because it’s small. It’s a theatrical back drop and it’s just how it sounds, like a hillbilly soap opry. It’s just a fun, entertaining show to say the least.

For someone unfamiliar with your music how would you describe it?
I would say it’s a look at life from the far side (like the farside cartoons). It’s just looking at normal every day life from another perspective.
“I’ll Pray For You” is a good example. When most people think about a broken heart, they think about trying to get over somebody. I look at it like “I’ll pray for you, I pray your brakes go out runnin’ down a hill”
Just something from a perspective that you don’t hear everyday. It all has a funny tilt to it .

Tell us how you got into country music/comedy in the first place? I was introduced to Ray Stevens records when I was around 6 years old and it left a mark. I thought it was hilarious that you could sing funny songs and people would laugh. I started playing piano when I was nine and I remember at my recitals i’d play a classical song to ever blues or funny song I could find. I just enjoy a lot of people laughing and responding to funny songs.

Do you have a favorite artist in today’s country music?
I really like what Midland’s doing. I like what Chris Stapleton’s doing. I like the liberty Eric Church is taking. But I’d probably say Old Dominion, I really like what they are doing. They’re a group of songwriters that can all play their instruments and if you shut the power off they can still keep going with their show. They are all so talented.

Who would you love to collaborate with in the future?
It would be great to sit down and write a song with Willie Nelson.

After the Fontanel, we go on the Family Matters tour. We head to Decatur, AL on July 8 where I’ll be opening up for Craig Morgan. Then we headline at the Indianapolis 400 and the night after we go to Minneapolis and open for Big & Rich. I love those guys they’re crazy and we’ve known each other for a long time. This fall we have a residency at the War Memorial Auditorium that starts in September. It will be the first Thursday of every month with Stormy Warren hosting and myself co-hosting. It will be almost a variety show with songwriters, up-in coming artists, legendary artists, and that’ll run 10 months from Sep-June. It’s gonna be awesome. We’ll probably do double or triple the amount of shows come 2018.

Now Let’s have a bit of fun. What are three things you can always find in your refrigerator? Feta cheese, hot sauce, eggs

If you could pick one food to eat every day for the rest of your life, what would that be?
Pizza

One food everyone tells you to try, but you just can’t get up the nerve.
Ox Tail Soup…never again..hahaha. Fondu and Gluten free anything!

ABOUT JOE DENIM:
Country singer/songwriter Joe Denim says and writes about what most other people dare even think. Now with his debut single “If I Had A Million Dollars,” Joe is giving the average American permission to recall the time when the American Dream was reachable. Never before in history has the average Joe been so tested and divided by a political campaign or felt so uncertain about the future for themselves and their children. They grew up dreaming of building tree-forts in their yards, of not having to eat Kraft dinners, but choosing to, because they loved mac and cheese. With “If I Had A Million Dollars”, Joe fantasizes not only about buying a well furnished house, but also about riding in a limousine with his girl, wearing fake fur coats (because real ones would be cruel).

Fans will recognize Joe’s country hit “Pray For You” which he wrote with Jaron Lowenstein but his writing catalogue is deep with fan favorites like “Better Half’ve,” and “Cover of The Field and Stream,” which he wrote with Steve Cropper, recorded with his good friend Rodney Carrington.

Before launching his solo career, Joe played keys on the road with numerous country stars including Steve Holy and Uncle Kracker. An active member of the Nashville songwriter community, Joe regularly writes with the likes of Earl Bud Lee (“Friends In Low Places”),Bill Anderson (“Give It Away”), Wyatt Earp (“She’s Got A Way With Words”) and many more. He can also be seen around the country hosting events from CMA Festival stages to Stadium Shows with headliners including Kid Rock, Zac Brown Band and Tim McGraw. An avid outdoorsman and hunter Joe was raised to respect the environment and leave it better than he’s found it. He has a passion for wildlife conservation and finds inspiration and solace out in the woods or on a lake.