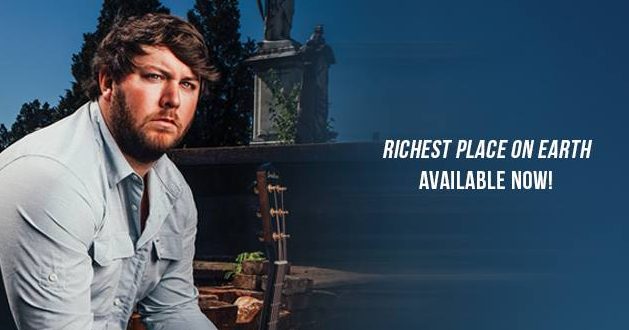 Was your new EP, Richest Place on Earth, born in Nashville or on the road?
It was actually on the road. I had the idea for a long time and I was going to write it in town. I was going to pitch the idea in a writers room with some hit writers and it always got shot down. It was my personal story about leaving a full time job and really taking a chance and not living a life full of regrets. I was on the road for a couple of weeks, running kind of tight on money and wondering if I had made the right decision. I wrote the whole song in my truck between Atlanta and Nashville.

Have to ask about your writing process and how your current single, “Forgettin’ You Was Fun,” came about.
That is my current single. I was in the writing room with Trick Savage, his real name is Pat…Pat-Trick. He’s from Oklahoma and he’s a fine guitarist and a great songwriter. He’s behind a couple of my favorite songs in town. We were kicking around some ideas and he said “Man everyone has that relationship they’re glad they got out of” and I said “Man that’s it!” So he threw the title out there, we ran with it, and we wrote the song in probably 30 minutes.

What’s a song you may have written ‘just for you,’ but has had a lot of response from listeners?
“Richest Place on Earth” is definitely one of those songs. Another song on the album that just kind of flowed out was “Britches” which was the first song on the album. It’s about growing up and spending time with my grandfather. That one has had a really good response, it’s just filled with that front porch philosophy kind of stuff. “The words in red aren’t just for decoration, everything that glitters isn’t gold, always take the time to call your mamma, she loves you more than anything in the world,” stuff like that, don’t burn your britches.

What would eight-year old Matt say to you now about your life and career?
You know, he’d probably be asking me if I was still picking my nose. I’ve always had kind of the same mannerisms and same personality. I think I figured myself out pretty early. I just kind of evolved into where I am today. It’s just been a natural progression.

Any plans to settle in Nashville or neighborhood you’re looking at?
Funny that you say that, I’m under contract for a house. I live in West Nashville right now, that’s really where I wanted to stay and hopefully I will end up back, but with the prices right now, it’s crazy.

What are some of the places you like to go in West Nashville?
There are a bunch of little hole-in-the-wall places. Alley Pub, it’s right off of 70, it’s such a fun place. The little movie theater they have there with half off movies on Tuesdays, so that’s always fun. I just like everything that’s right there together. The Gold’s Gym is right there, a big Kroger, World Music, so I always go there to get my knick knack stuff. They let my band rehearse in their new room which is a really cool room. We will probably try to do a show there before too long.

Say you had a completely free day in Nashville—no work allowed. What would you be doing?
Actually whenever I have just free time, I like to pull out records that I haven’t listened to in a long time and just listen to music and have my feet propped up. A lot of times I’ll play guitar too and listen to music I typically wouldn’t listen to, to get out of the box a little bit. It tends to help me with writing when I go back to the writing process, but it’s also guitar practice.

What Nashville restaurants are you loving?
I am such a foodie already and if you want to talk about a city with great food, Nashville is it. There are places I have been to that I love but have not been back to because I want to try as many new things as possible. We went to one of my favorites last night, one of the best steaks in town, Sperry’s on Harding Pike. One of my other favorites is in East Nashville and it’s called Lockeland Table, kind of a farm to table feel and they have a little brick oven for pizza’s. It’s really good and affordable. I could go on all day! I’m a burger freak, I love cheeseburgers and every place in Nashville has great burgers. Obviously The Pharmacy is on the list, Burger Republic is on the list, Corner Pub has a killer burger. I hate that they closed the Midtown location but they have a bunch of other locations.

Which burger at Corner Pub is your favorite?
Oh, the Black and Bleu! I definitely have to go with that one!

Who are you dying to work with or collaborate with?
Well, one person I’ve always wanted to work with is Lee Brice. His former producer, who produced a lot of his big hits, produced my new record. I’ve run into Lee several times. Durango, who I signed a deal with, took me to the Opry for the first time a couple weeks ago and Lee was playing. We got to talk a lot backstage and I talked to his manager and his rep at William Morris and we just bounced some ideas around. I sent him the new record and he said he loved it. That was really a great compliment because it’s the sound that I’m drawn to is his songwriting and his sound.

Would you say the Opry is your biggest accomplishment so far?
It was definitely a pinch me moment. I don’t know at what point you start to make it, I set the bar pretty high for myself, but that was definitely one of those moments where I was like “Wow!” Even just to look back at a year ago and see what I was doing compared to now is kind of wild. A lot of things can happen!

What else do you have going on this year?
We are doing a whole bunch of touring and pushing the new record. Some things that I might not be able to mention yet but I’ll hint to, we are going to have some cool radio stuff happen. I just wrapped the music video for “Richest Place on Earth” which is going to be the second single and it’s incredibly powerful. I had a company in Georgia that filmed a bunch of movies and videos in my hometown and they came to me and wanted to be a part of it. They did a really nice, high budget video for “Pennies on the Dollar” for me and I’m planning to take it to CMT obviously and get the whole ride, but I’m really really proud of how that video turned out.

How are your acting skills when it comes to the music videos?
Haha we outsourced my acting skills! They put me in weird cameos playing and singing. I’m so awkward. Like right now, us just talking, I’m fine because it happens so naturally and it’s calm. But the acting, it’s awkward for me to lip sync to my own song. It’s like Ricky Bobby, “I don’t know what to do with my hands,” that’s how I feel. But there are some really cool shots, so I’m really excited for them to release that video.