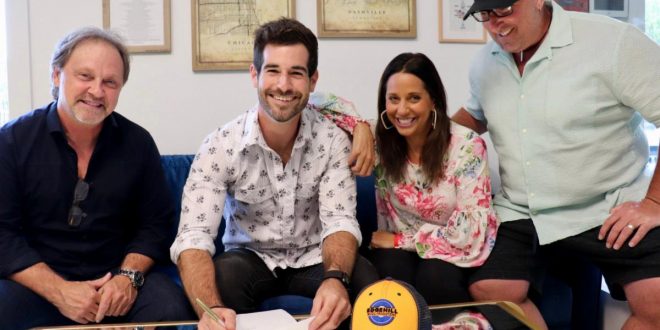 Edgehill Music Publishing co-founders Josh and Tara Joseph announced today the signing of artist and songwriter Alex Smith to an exclusive publishing agreement. The Louisiana native has been in the studio with producer Kent Wells working on a project that will be released soon.

“Alex was one of the first writers we were introduced to when we started Edgehill Music Publishing,” said Tara and Josh Joseph jointly. “His attitude, work ethic and especially his creativity are a perfect match for this growing company.”

Born in Alexandria, Louisiana to a musical family, Smith picked up his first guitar at age 15 and began learning songs on YouTube. His first public performances were in church and later in local clubs and bars. He made his first trip to Nashville in 2015 and made the permanent move to Music City to pursue his dreams a year later. A writer and story-teller at heart, his upcoming project features noted blues musician Sonny Landreth, hit writer Leslie Satcher and his own father, H.B. Smith.

“Alex brings an infectious attitude everywhere he goes, and that carries over into his writes and in the studio, ” said Kent Wells, who also serves as Edgehill’s Creative Director. “We’re excited to have him in the Edgehill family, and we can’t wait to share the music we’ve been making.”

“I feel so blessed to have this opportunity,” said Alex. “I came to Nashville to write songs, and Edgehill and their amazing team have turned a dream into reality. I can’t wait for everyone to hear the music and see what the future holds!”

Music editor for Nashville.com. Jerry Holthouse is a content writer, songwriter and a graphic designer. He owns and runs Holthouse Creative, a full service creative agency. He is an avid outdoorsman and a lover of everything music. You can contact him at JerryHolthouse@Nashville.com
Previous Newsboys Celebrate Double Platinum Certification
Next Gibson Guitar Gives $300,000 Donation To Nashville Public Schools