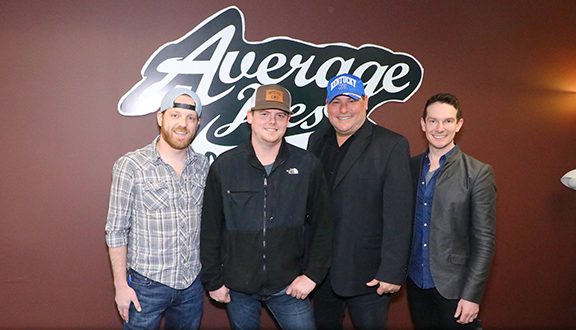 Emerging singer-songwriter Dustin Collins has signed a label-services deal with Average Joes Entertainment for marketing and distribution of Collins’ new album set for release this summer on DCDL Entertainment.

Fresh off his independent single “Cold Dead Hands,” which ascended to No. 1 on the Billboard Singles Sales chart, Collins is in the studio preparing for his next music project.

“I am honored and humbled to be part of the Average Joes family! Their team believes in authentic, nonconformist music and knows how to get it out to the fans. This wouldn’t be possible if it weren’t for mentors in my life like David Long and Dave Hufana. They’ve been there for me from the beginning and continue this wild ride with me!” Collins exclaimed.

“We are excited to partner with Dustin, his music is authentic and his live show entertains, impresses and he wins new fans every night. We look forward to bringing his music to the widest possible audience as his career continues to grow,” said Forrest Latta, A&R, Average Joes Entertainment.

A true road warrior, Collins spent hundreds of miles on the road playing in honky tonks, fairs and festivals throughout the midwest and his home state of Kentucky, including a slot on Aaron Watson’s Vaquero Tour, as well as opening for Chris Janson, Granger Smith, Kane Brown, the Kentucky Headhunters and many more.

Music editor for Nashville.com. Jerry Holthouse is a content writer, songwriter and a graphic designer. He owns and runs Holthouse Creative, a full service creative agency. He is an avid outdoorsman and a lover of everything music. You can contact him at JerryHolthouse@Nashville.com
Previous Carrie Underwood To Release First Album On Capitol Records September 14
Next International Songwriting Competition Announces 2017 Winners