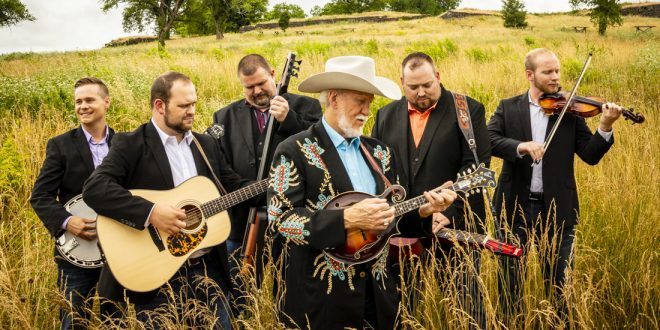 At 74, Doyle Lawson seems to be unstoppable. He continues to work a rigorous tour schedule, record his own music, and produce other top acoustic artists. Doyle has trained through his band some of the biggest names in Bluegrass and Americana music. The multi-award winner and 2-time Grammy nominee along with his band, Quicksilver is once again nominated for International Bluegrass Music Assn Vocal Group of the Year, and honor the group has won 8 times prior.

The Bluegrass legend has just announced his new album Live in Prague, Czech Republic. It was recorded live at the beautiful Dlabacov Hall – Pyramida theatre in downtown Prague on January 26, 2019. An enthusiastic, sold-out crowd can be heard enjoying the high energy show that was captured for this album. With 14 tracks, Doyle and the band perform some of their previously recorded work, such as the hit “Little Girl,” the often requested Gospel classic “On The Sea of Life” and the ever-popular “I’ll Be True While Your Gone,” along with new arrangements of never-before recorded songs by the group, including “Living Like There’s No Tomorrow,” “Leaving On Her Mind,” and “Shenandoah Breakdown” among others.

Inducted into the Bluegrass Music Hall of Fame in 2012, Lawson is also a 2006 recipient of a National Heritage Fellowship awarded by the National Endowment for the Arts, which is the United States’ highest honor in the folk and traditional arts. Featuring the best musicianship and vocals in the business – with the Legendary Lawson at the helm -the band currently includes members Josh Swift (2017 IBMA Resonator Guitar Player of the Year), Joe Dean (banjo), Stephen Burwell (fiddle), Jake Vanover (Guitar and vocals), Jerry Cole (bass and vocals).

Nominated for Grammys in 2016 and 2017, the group has many major awards to their credit, including eight (8) International Bluegrass Music Association (IBMA) wins for Vocal Group of The Year, an honor for which the group is again nominated in the 2019 IBMA awards.

Music editor for Nashville.com. Jerry Holthouse is a content writer, songwriter and a graphic designer. He owns and runs Holthouse Creative, a full service creative agency. He is an avid outdoorsman and a lover of everything music. You can contact him at JerryHolthouse@Nashville.com
Previous Craig Morgan Releases First Album in Three Years
Next Watch: Cassadee Pope Sings “I’ve Been Good”