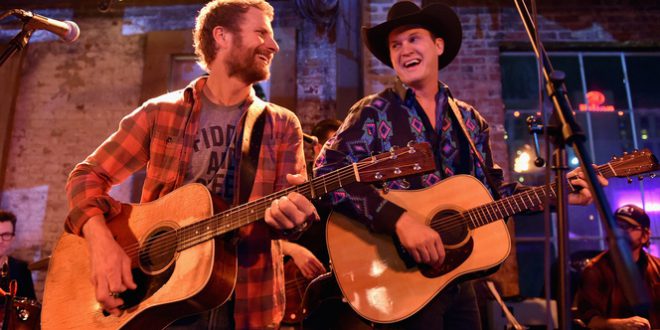 “It’s really a full-circle moment for me to be opening Whiskey Row on this street. When I first moved to Nashville, Broadway was my second home…I was the first artist to be hired and fired from The Stage,” Bentley told the elbow room only crowd. “It’s surreal to think that now I can just jump in my truck and run over here anytime, and that it might possibly be a place where new artists could get their start.”

Bentley set the tone for the night, kicking off with his favorite 90’s Country cover songs before calling out artists friends in the crowd to join. Dozens of artists spontaneously took the stage including Thomas Rhett who performed his father Rhett Akins’ “That Ain’t My Truck,” Maren Morris had the crowd singing along as she sang Deana Carter’s “Strawberry Wine” and Brothers Osborne kept the energy high with their rendition of Alan Jackson’s “Chattahoochee.”  Another highlight saw Bentley collaborate with Lauren Alaina, Bobby Bones and LANCO’s Brandon Lancaster for Brooks & Dunn’s “Brand New Man.” Jon Pardi continued the fun on the second floor, while Bentley surprised fans on the ground level hopping on stage with the house band. Guests danced long into the night as the DJ’s, Diesel and Tilow played hours after the live sets ended.

“We’re thrilled to open the doors at Whiskey Row in Dierks’ beloved Nashville,” says Riot Hospitality Group CEO Ryan Hibbert. “Lower Broadway is one of the country’s top destinations for music and nightlife, and we couldn’t be prouder to bring our brand of first class entertainment to Nashville.”

Formerly the long-time home of Gruhn’s Guitars, the historic building is nestled between the very institutions where Bentley cut his teeth, sharing an alley with the Ryman Auditorium where he often finds himself onstage as a Grand Ole Opry member and across the street from the Bridgestone Arena where Bentley sold out his tour stop just a year ago and where he cheered on the Nashville Predators through the Stanley Cup Finals. The new location includes three floors and a rooftop patio, which is also the highest rooftop bar on Broadway, and that intertwined with Bentley’s love for live music and sports delivers an authentic Nashville experience.