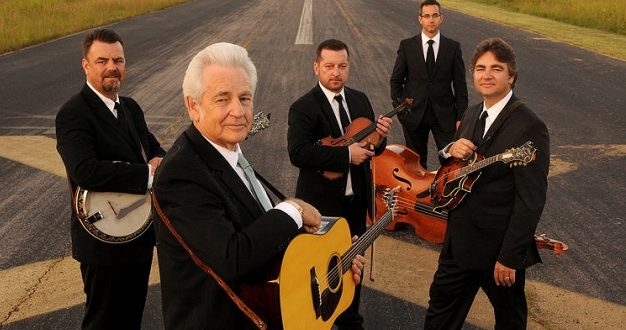 UPDATE: This event has been postponed. Once a rescheduled date is announced, we will update this page. The Del McCoury Band at Ryman Auditorium, Nashville, Tennessee 6/18/20 -> Buy TICKETS Here!

Living bluegrass legend Del McCoury’s upcoming album Almost Proud is a collection of tunes that ring true to his lifelong working man mentality. Full of a myriad of blue-collar anthems—working-class heroes and Del’s wife of 57 years get their own songs, and there’s no shortage of cheatin’ songs and lonesome, love-lost numbers—the songs Almost Proud were all hand-picked by McCoury through hours and hours of listening to demos for the exact right tunes. The big picture of Almost Proud certainly would not be complete without a drinking song or two, and today, Del has released one of them for fans to dig into. “Honky Tonk Nights” kicks off with a flurry of mandolin and fiddle before settling into its hard-driving feel and McCoury’s instantly-recognizable vocal delivery. By the first chorus, a second voice appears in a rare higher-than-Del register and then down to the melody for verse two after a brief round of instrumental solos. That’s a longtime friend of the McCourys, fellow Nashville legend Vince Gill. Listen above.

Over the course of the pandemic, McCoury found himself as fully engaged and absorbed by music as he was when he was a teenager, throwing himself into listening to as much music as he could. According to Del, he listened to well over 200 songs, including some that had been in a neglected box in his music room for over 10 years. He listened intently. He listened for songs that excited him. He listened for songs that he would find interesting if he heard them on the radio. When asked about the song selection, Del says, “I’m as excited about listening to new music today as the day I started—finding a new tune or a story that tickles me. This album is the best of what I heard while the world was on pause.” With a strong idea of his favorites, the Del McCoury band entered the studio, mixing in some classics along the way—notably “Rainbow of My Dreams,” which McCoury first heard sung by a young Lester Flatt in the 1940s.

Almost Proud is packed with songs from a wide variety of writers—well known and obscure—and includes a few performances from old friends. Just like his live performances, McCoury started Almost Proud with his regular point of view: “If I’m not interested, how can I expect the audience to be?” This collection of songs kept 82-year-old McCoury engaged during the pandemic and it’s part of a body of work that ended up being nearly 30 songs—so it’s likely to see a volume 2 in the very near future. At the end of the day, Del may be almost proud of what he’s accomplished, but he’s always proud of the music he records.

Music editor for Nashville.com. Jerry Holthouse is a content writer, songwriter and a graphic designer. He owns and runs Holthouse Creative, a full service creative agency. He is an avid outdoorsman and a lover of everything music. You can contact him at JerryHolthouse@Nashville.com
Previous Bonnaroo Tickets Officially On Sale
Next WATCH: Maren Morris’ “Circles Around This Town”