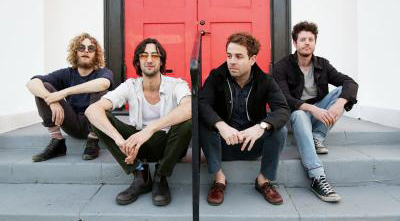 Dawes share their new single, “Someone Else’s Café / Doomscroller Tries to Relax,” available now via Rounder Records at all DSPs and streaming services. Listen above.

“The first half of this song could be about tyrants,” says Dawes frontman Taylor Goldsmith. “But it could also be about anyone who thinks that a little more control is gonna make everything ok. The second half is a response to that developing reality of the first half. The world might be a scary place sometimes but, to some degree, I want to believe I can decide how I respond to it.

“Every time a take was completed felt like a major accomplishment. It being 10 minutes really raised the stakes. Didn’t wanna be the guy to mess up in minute 7 or 8 with everyone playing flawlessly up to that point. This whole album, and this song especially, felt a little beyond our comfort zone and I’m really proud of what that’s done to the music. I like to think that you can hear the eye contact, that you can hear us thinking on our feet. It’s already become a top 5er to play live. Happy to finally have it out in the world.”

Produced by longtime collaborator Jonathan Wilson, “Misadventures Of Doomscroller” represents an adventurous new turn for Dawes, evincing a more ambitious, exploratory approach towards recording than ever before.

“We’ve always prided ourselves on being minimalists. With this record we set out on being MAXIMALISTS,” says Goldsmith. “Still a quartet. Still not letting these songs hide behind any tricks or effects. But really letting the songs breathe and stretch and live however they want to. We decided to stop having any regard for short attention spans. Our ambitions go beyond the musical with this one.

“We also wanted to honor the traditional length of a vinyl record – 40-45 minutes – but disregard any concern for numbers of tracks. The way Miles or Herbie often did. Documenting the songs is only half of the picture. For this record, they’re also the platform for us to jump off from and get lost in. I think the best way I can say it is – we wanted this record to be less a collection of songs and more a collection of music.”

“We wanted a musical drama, an ensemble cast with linked arms kicking highly; a transcription of a band meeting we haven’t even had yet,” adds bassist Wylie Gelber. “Eight legs and eight arms, in a room, stretching deeper than we ever knew we could…The Intros have Outros. The Outros have Bridges.”

Dawes will mark the arrival of “Misadventures Of Doomscroller” with a wide-ranging international live schedule, including a stop September 24-25 at the Pilgrimage Music & Cultural Festival in Franklin TN. GET TICKETS HERE.

Music editor for Nashville.com. Jerry Holthouse is a content writer, songwriter and a graphic designer. He owns and runs Holthouse Creative, a full service creative agency. He is an avid outdoorsman and a lover of everything music. You can contact him at JerryHolthouse@Nashville.com
Previous Country Rocker Tim Montana Drops “Reno”
Next Country Star Mickey Gilley Passes At 86