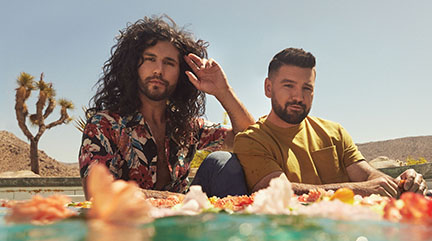 Three years after the self-titled album that catapulted the duo into new heights of their career, Dan + Shay are back to announce their brand new album Good Things, available everywhere on August 13

The LP features 12 songs with production helmed by the duo’s Dan Smyers, including the newly available title track (LISTEN ABOVE). Good Things” provides a glimpse into what fans can expect from the unreleased collection of music.

One month before it is even fully out to the world, Good Things is already proving to be another record-breaking album. Dan + Shay shattered ceilings with multi-week No.1 “10,000 Hours” featuring Justin Bieber, the album’s first single released in October 2019. The 4x Platinum hit had the biggest first-week streaming total in country music history and was the fastest country song to reach one million U.S. track equivalents in 2019. The worldwide smash spent 21 weeks at No.1 on Billboard’s Hot Country Songs chart (5th longest run in chart history) and landed the duo their third GRAMMY Award for Best Country Duo/Group Performance, making them the first artist to do so 3x consecutively since the category’s inception. Dan + Shay followed with Platinum-certified “I Should Probably Go To Bed,” which quickly became their fifth consecutive and eighth career No.1, has surpassed 300 million global streams and has garnered over 1.5 million track equivalents. Their current single, “Glad You Exist,” recently became RIAA Gold-certified and has accumulated 800,000 track equivalents so far.

Music editor for Nashville.com. Jerry Holthouse is a content writer, songwriter and a graphic designer. He owns and runs Holthouse Creative, a full service creative agency. He is an avid outdoorsman and a lover of everything music. You can contact him at JerryHolthouse@Nashville.com
Previous Carly Pearce Will Host ACM Honors
Next Bill Anderson Celebrates 60th Anniversary As Opry member