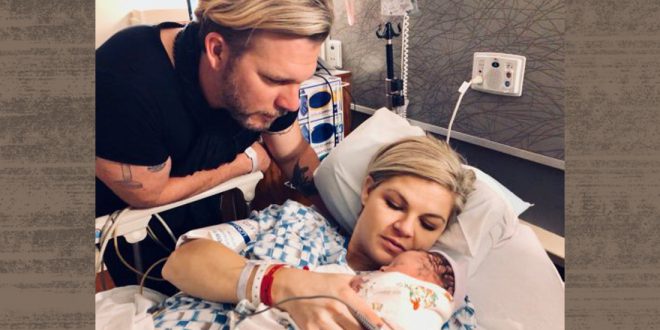 NBC The Voice‘s Craig Wayne Boyd and his wifeTaylor are proud to announce the arrival of the latest addition to their growing family. Last night (December 28) in Nashville, the couple welcomed a new baby boy. Graydon Scott Boyd was born at 10:18 PM, weighing in at 6 lbs., 4 oz. and measuring 19 inches long.
With the birth of Graydon, the last week of December will now include three separate birthday celebrations in the Boyd home. Craig and his middle child, Dakota Lynne, share the same date of birth. This Sunday, December 31, the singer turns 39 with his daughter turning 2.
“Tay, Jax, Kota and I are proud to announce that last night, Graydon Scott was welcomed into our home and hearts,” Boyd told People. “The last week of December will forever be a huge week in the Boyd family … #BoydsRus”
Graydon, named after Craig’s great-grandfather, joins the now family of five, which also includes his 5-year-old son, Jaxon.
Craig reached another milestone this past year with the release of his first full-length album since winning Season 7 of NBC’s The Voice. His new project, Top Shelf, was released in October and is available for purchase now at iTunes, Amazon and other digital retailers.

Boyd came to the attention of America as the winner of Season 7 of the hit NBC television program, “The Voice.” During his run on the show, Craig performed his versions of classic country hits such as “I Walk The Line,” “You Look So Good In Love,” and “Workin’ Man Blues.” During his rise to fame, Boyd’s “My Baby’s Got A Smile On Her Face” debuted at No. 1 on the Hot Country Songs chart, becoming the second song (following Garth Brooks’ “More Than A Memory”) to achieve that level of chart success.