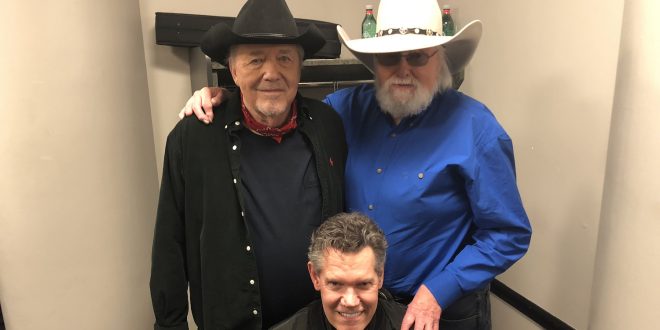 “This Legend, Charlie Daniels, was at the core of my roots and influences in music. We recorded “Just As I Am” together for his Gospel Album. “Oh lamb of God I come…I come,” sings the hymn. An honor to call him my friend. Fiddle is gonna be roaring in heaven tonight! #RIP”
–Billy Ray Cyrus

“Charlie Daniels was someone you could lean on at any time or ask his advice. I am so blessed to have known him as a peer, as a friend and performed with him many times. “The Devil Went Down to Georgia,” well, the devil never had a chance! And now Charlie is playing that fiddle with the heavenly angels in the Big Man’s band. Some day I’ll see you again, Charlie.”
–Tanya Tucker

“Every time I was around Charlie I felt like I was standing next to pure country. He sang about Faith, Patriotism, family and having good, clean fun. I’m so grateful that I got to meet and know a truly great man.”
–Naomi Judd

“Getting to open for Mr. Charlie was one of my very first memorable moments in country music. He’s an important part of my story. When Mom & I opened for Mr. Charlie in the 80’s, I was so young, so naive, and in awe of my heroes and sheroes in country music. I spent most of my time trying to talk to, hang out with and learn everything I could from the artists we played shows with. Mr. Charlie was always so kind to me. He always made me feel so important. His heart. Oh my. His passion for God and his country, it really was what made him such a gifted soul. I adore him!! He’d come over to me in a crowded room to hug me. He always made time for me and I respect him so much for the way he treated me and so many others in the room. During one of our moments backstage before a show, I was talking to Mr. Charlie about how nervous I was being onstage. He told me to “Never look at the empty seats.” I have not forgotten his words to me. Charlie Daniels is a maverick. His heart is bigger than most. He lived and he loved large!!!!! Thank you for your service to our great country sir. I love you so.”
–Wynonna Judd

“We are very sad today at the news of Charlie Daniels passing. Charlie was a great entertainer, great friend, and a great American.”
–Bellamy Brothers

“Charlie was a big ol’ teddy bear…one of the kindest, gentlest people I’ve ever known…with a wonderful sense of humor and a great outlook on life. I’ve played golf with him, shared the Opry stage with him, sat alongside him at the Titans football games, and always marveled at his talent and his tenacity. There’s a big ol’ hole in lots of our hearts today with the news of his passing.”
–Bill Anderson

“He was one of my biggest heroes. One of the greatest guys I’ve ever known. RIP my brother Charlie.”
–Phil Vassar

“Charlie Daniels’ work on Earth is done. While we will miss him and his talents here, we know he has gone home now. Rest In Peace, old friend. You are so loved. Sending love to Hazel and the entire family.”
–Steve Wariner

“Nobody I respected or admired, in this world, any MORE than my real friend, Charlie Daniels.”
–Randy Owen, ALABAMA

“One of my favorite people on this earth Charlie Daniels has gone on to his eternal reward today. Oh, how he will be missed at the Grand Ole Opry and everywhere else he was loved. Charlie, thank you for being a Patriot, a Statesman, a Christian, a friend, a father, a husband to Miss Hazel, and a great maker of music that will live on for generations. You made an indelible mark in this life, and you will be missed my brother.”
–Ricky Skaggs

“Charlie Daniels embodied the fire of the South. He blurred lines between rock and country, when rock didn’t think country was cool, and his Volunteer Jams weren’t just legendary, they brought people from both of those worlds together. He was a patriot, a proud American, a world class musician, an incredible showman, as well as a wonderful father, husband, grandpa and friend. We’re all so sad to lose him, but if I know Charlie, he’s up in heaven, rosining up his bow and getting ready to let those fingers fly! Godspeed, my friend, you’re home.”
–Ronnie Milsap

“It is a sad day for a southern gentleman. A soft spoken Godly man. A man I have known for 50 years. Yes my heart is broken but Hazel and Charlie Jr. have all of us holding them with the strength that Mr. Daniels has given us through the years. We are missing a man that already has the hands of his great God holding him. I have no words.”
–Doug Gray, The Marshall Tucker Band

“If there were a Southern Rock/Country/GOD fearing Patriot/Good old boy on Mt. Rushmore, Charlie Daniels likeness would be hammered, chiseled, and blasted onto it. We would follow him into battle. We would not follow him on stage. We couldn’t… no one else could either…‘nuff said. Heaven has never rocked like its ROCKIN’ right now. Charlie old friend, we’ll see you when we do. Rock on, friend.”
–Larry Gatlin

“Charlie was outspoken and larger than life on stage. Off stage, he was kind, compassionate and helped so many along the way, both in music and beyond. A showman, a patriot, a one-of-a-kind. He will be greatly missed.”
–John Anderson

“‘Charlie Daniels was one of the finest gentlemen I have ever known. He and Hazel have been two of my and Mary’s dearest friends over the past years. We laughed, cried and prayed together. Not only was he a gift to us, but to the entire world. A few years ago, Charlie had a colt born on my birthday and named him after me. The memories go on and on, so I’ll leave it at this — Charlie, thank you for everything you’ve done for me, your endless support of us, your unconditional love, and the sweet memories. It is my greatest honor to be your Country Music Hall of Fame classmate–you will live on forever as my hero… my friend. I love you.”
–Randy Travis

“Charlie’s been like a brother to me since the early ‘70s. He’s one of the greatest, kindest people I’d ever met in my life. Not only Charlie – but he surrounded himself with incredible people that I love, especially his wife Hazel. We did a duet of a song Charlie wrote called ‘Willie Jones’ and it was one of the most fun studio sessions I’ve been in. I’ve always loved playing Volunteer Jams through the years – I will miss my dear friend. ”

Music editor for Nashville.com. Jerry Holthouse is a content writer, songwriter and a graphic designer. He owns and runs Holthouse Creative, a full service creative agency. He is an avid outdoorsman and a lover of everything music. You can contact him at JerryHolthouse@Nashville.com
Previous Luke Bryan Scores His 25th Number 1
Next Funeral Services For Charlie Daniels Have Been Announced