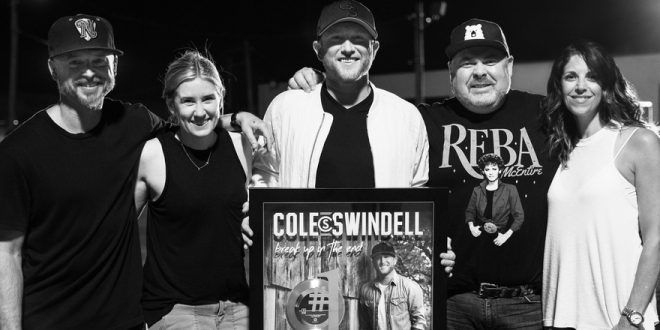 Cole Swindell’s “Break Up In The End” Certified Platinum

Cole Swindell kicks off the summer with another million-selling song “Break Up In The End.” The song was just certified Platinum  by RIAA. “Break Up In The End,” written by Jon Nite, Chase McGill and Jessie Jo Dillon, became Swindell’s eighth career No. 1 single and also his 8th Platinum certified single. The Warner Music Nashville rising star was surprised with the plaque presentation last night on the set of his video shoot for his current single “Love You Too Late.”

Additionally, “Break Up In The End” is nominated for Video of the Year and Male Video of the Year at the fan-voted CMT Music Awards on CMT Wednesday, June 5 live from Nashville at 7:00 PM CDT. Click  HERE  to vote or go directly to  vote.cmt.com .

“Break Up In The End,” the first single from Swindell’s No. 1 selling third album, All of It, became his 8th No. 1 career single as a solo artist. In addition to the 2019 Grammy nomination for Best Country Song and an ACM Song of the Year nomination (2019), “Break Up In The End” has been named one of the best country songs of 2018 by Amazon, Spotify, Billboard and You Tube among others. Swindell performed the hit single on last summer’s (2018) ABC Television special CMA Fest and when he headlined the NBC’s Citi Concert Series on TODAY (2018).

Music editor for Nashville.com. Jerry Holthouse is a content writer, songwriter and a graphic designer. He owns and runs Holthouse Creative, a full service creative agency. He is an avid outdoorsman and a lover of everything music. You can contact him at JerryHolthouse@Nashville.com
Previous Lewis Brice And Tin Roof Team Up For Lewispalooza 9
Next Here’s Your Chance To Perform At CMA Fest