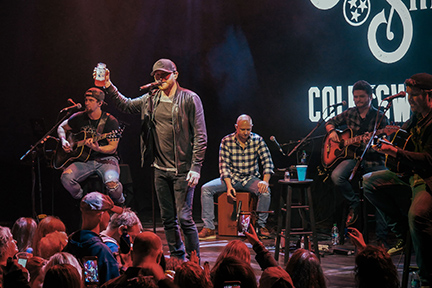 Cole Swindell celebrated the songwriters of his eighth career and now Grammy-nominated No. 1 single “Break Up In The End” with a party at The Cowan at Top Golf. Jon Nite, Chase McGill and Jessie Jo Dillon celebrated not only their song reaching the top spot on the country singles charts, but the song was recently certified Gold by the RIAA and also nominated for a 2019 Grammy® for Best Country Song at this Sunday night’s Grammy Awards.

“This is one of those songs that as a songwriter you come here to write and the kind of song you come to Nashville to hear,” said Cole Swindell. “For me, this is one of those songs. And to think a song like this could have gone to any artist in this town, but the fact that Jon, Chase and Jessie Jo trusted me with it definitely makes it even more special.”

“Break Up In The End,” the first single from Swindell’s No. 1 selling third album, All of It, became his 8th No. 1 career single as a solo artist. In addition to the Grammy® nomination for Best Country Song the song has been named one of the best country songs of 2018 by Amazon, Spotify,Billboard and You Tube among others. Swindell performed the hit single on last summer’s (2018) ABC Television special CMA Fest and when he headlined the NBC’s Citi Concert Series on TODAY (2018).

Immediately following the No. 1 party celebration for “Break Up In The End,” Swindell opened the doors at 5:30 pm to hundreds of his fans (the Down Home Crew), who started lining up outside The Cowan in at 11 am in the pouring rain, to join the industry crowd of songwriters, tastemakers, friends and media who stayed for the official moonshine launch party. The moonshine launch party, also held at The Cowan at Top Golf was hosted by Sugarlands Distilling Company to officially launch Swindell’s line of moonshine and his new flavor, Pre Show Punch. Pre Show Punch is the followup of his Peppermint moonshine released in late 2018. Sugarlands Distilling Company partnered with the rising superstar in 2018 to offer a line of moonshine that captures the down-home spirit of fans of country music + moonshine. Guests were treated to a performance by Swindell and his band who kicked off the set with a performance of his current single “Love You Too Late,” as well as his No. 1 Grammy-nominated hit “Break Up In The End,” and Platinum-certified No. 1 hits including “Ain’t Worth The Whiskey,” “Middle of a Memory,” and “Chillin’ It.”

Music editor for Nashville.com. Jerry Holthouse is a content writer, songwriter and a graphic designer. He owns and runs Holthouse Creative, a full service creative agency. He is an avid outdoorsman and a lover of everything music. You can contact him at JerryHolthouse@Nashville.com
Previous Lynyrd Skynyrd Announces Last Dates For Farewell Tour
Next Country Music Cruise Lineup Announced