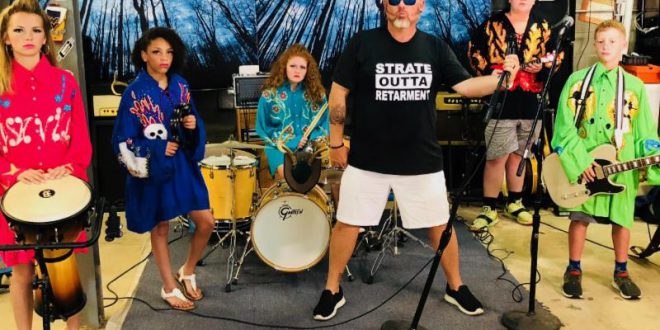 Cledus T. Judd Is Back!

Six years after hanging up his overalls, Cledus T. Judd is “Strate Outta Retarment.” The comedian has done a “My Weight’s Goin’ Up Down,” parody of Morgan Wallen’s #1 Country single “Up Down” featuring Florida Georgia Line. The video has garnered over 15,000 viewsa and the full clip will premiere on CMT Music and CMT.com on Friday, July 27, 2018.

The clip pulls no punches in the weight-loss world, and nutrition is reserved strictly for the kids. Cledus scarfs down fried chicken, hot dogs, burgers, ice cream, sweet tea and more, while the kids are forced to eat mystery health food. He saved on casting enlisting the same kids – including his daughter – to star in several scenes.

The video will begin airing on numerous outlets beginning Saturday, July 28, and the “My Weight’s Goin’ Up Down” is currently available at iTunes , Spotify, Amazon and all download and streaming services.

Country Music’s master of parodies walked away from writing, touring and releasing music in 2012. His successful career included nine studio albums, two EPs and no less than 25 music videos. No one was immune to his wit, sarcasm and often self-deprecating humor on songs like “I Love NASCAR,” “My Cellmate Thinks I’m Sexy,” “Did I Shave My Back For This?” and celebs such as Toby Keith, Shania Twain, Trace Adkins, Joe Diffie, Dena Carter and Montgomery Gentry starred in his videos. He toured with the likes of Brooks & Dunn, Brad Paisley, Trace Adkins, Toby Keith and others.

The life of stardom had a downside for Cledus, as constant partying led to drug addiction. He credits the birth of his daughter, now 14, for leading him to a clean life and a dedication to spending more time with his family. His self-imposed exile began a process of healing. He kept a hand in the business as a co-host of the WTCR morning radio show out of Huntington, West Virginia.

“I left Nashville behind,” said Cledus.“I focused mostly on my daughter and my morning radio show,but after I would get off in the mornings my daughter would be at school I became bored. I’m a creative soul and there was nothing to feed it. I tried to find any kind of work I could after my show,”he recounts. “I’d buy and remodel dilapidated houses. Then, when I came home, covered in dirt and soot, coughing up coal, I’d think, ‘Man if Kix and Ronnie could see me now!”

A year or so ago Ray Stevens asked him to open for him one night in Renfro Valley, Kentucky. “Ray is my idol, so I did it,” Cledus says. After his set, the whole room -over 1500 people – gave him a standing ovation. When he got off the stage, Ray asked him why he retired. He said, “Well, Ray, I just didn’t feel like I had much relevance anymore.” Then Ray said, “Well, 1500 fans just stood up for you out there. I think you’re relevant.”

Encouragement from his daughter helped make the decision to jump back into music. “Dad, if you’re gonna go stand on the back of a hay truck and sing funny songs to make money, I would rather you stay home and be with me. But if you’re going to change people’s lives, I’ll be waiting for you when you get home.

“Besides,” she added, “we’re sick of watching your old YouTube videos. Go out and make some new ones , and besides I’ll need a Ferrari in a few years.”

Cledus headed back to Nashville to write songs, both serious and humorous. Brantley Gilbert picked up one of them, “Three Feet Of Water,” for his 2017 album The Devil Don’t Sleep .

Friends cheered him on. Fans flooded his Facebook with their approval. Old and new have welcomed him back. An email to Cledus from CMT’s Leslie Fram speaking for them all: “YOU ARE BACK! I love it. You are a genius!”

“It’s the same old Cledus on the outside,” he guarantees. “But the same old Cledus don’t exist no more on the inside. I’ve been loaded with money and I’ve been broke. I’ve been suicidal and I’ve been happy. I’ve been all of those things, and I’m not ashamed of any of it because I know I ain’t the only one. So things are different this time around. The fans changed my life the first go around so I made a promise to God that this go around I would try and change theirs. Give them hope and ease their troubles for awhile. Make ‘em laugh make ‘em cry, make ‘em feel good about their own life for a few hours. Come on out to one of my shows, and I might pull up a chair with you. We’ll talk , we’ll hang out, we’ll share stories but most importantly we will laugh!I want to touch peoples’ lives for the better. That’s the sole reason for my return. I have a beautiful family and home like I never dreamed of, but nothing compares to the joy I get from sharing my journey!”

Music editor for Nashville.com. Jerry Holthouse is a content writer, songwriter and a graphic designer. He owns and runs Holthouse Creative, a full service creative agency. He is an avid outdoorsman and a lover of everything music. You can contact him at JerryHolthouse@Nashville.com
Previous Sister Hazel Gets Some Help From Heavy-Hitter Nashville Songwriters on “Wind”
Next Kevin Costner Gives Whiskey Myers A Boost