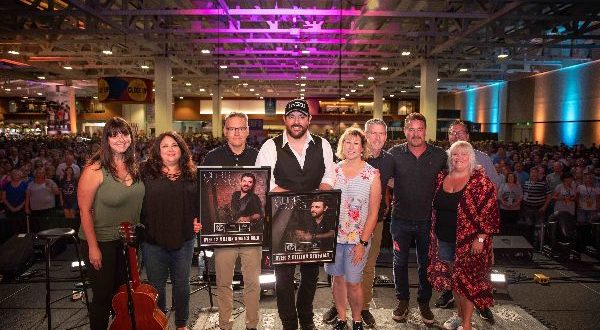 Chris Young Is Officially A “Billion-Air”

Chris Young officially joined the “Billion-Airs” club as the RCA Records Nashville artist and multi-platinum entertainer was surprised onstage during his Artist of the Day play at CMA Music Fest with plaques commemorating his more than 2 Billion career streams and 12 Million singles sold. The timing was perfect as Chris was able to share the honor with fans crowding every available space on the Fan Fair X floor, pointing to the audience and sharing, “This is thanks to every single person here who has bought a CD, streamed a single or come to my concerts – I can’t thank you enough for all the support you’ve shown me and can’t wait to share more music with you soon!”

As his current single “Raised On Country” climbs the country radio charts, Chris will quickly surpass the 2 Billion streams tally as the Grammy-nominated singer teased two new songs in the last 72 hours. On Thursday, the Grand Ole Opry member stood in the hallowed circle for an emotionally charged performance of “Drowning,” an intensely personal song written with Corey Crowder and Josh Hoge. And just last night, Spotify House at Ole Red was the scene for another surprise as Chris welcomed Lauren Alaina to the stage for the first-ever performance of their duet, “Town Ain’t Big Enough.” Both songs will drop to digital and streaming services in the coming weeks and will be found on his upcoming album, Raised On Country, releasing later this year.

Music editor for Nashville.com. Jerry Holthouse is a content writer, songwriter and a graphic designer. He owns and runs Holthouse Creative, a full service creative agency. He is an avid outdoorsman and a lover of everything music. You can contact him at JerryHolthouse@Nashville.com
Previous CMA Fest Day 3: Lil Nas X, Billy Ray Cyrus and Keith Urban Perform “Old Town Road”
Next Kelsea Ballerini Scores Her Fifth Career No. 1