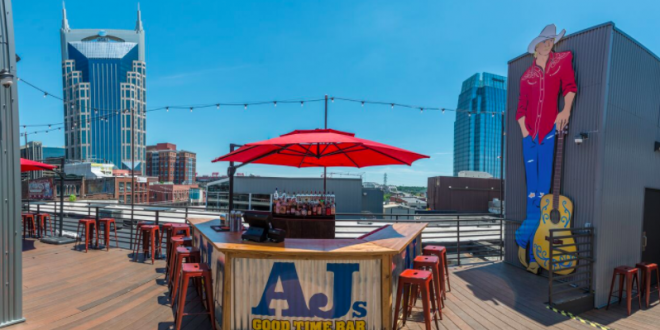 Alan Jackson will be inducted into the Country Music Hall of Fame this weekend (Sun., Oct. 22). To celebrate we are giving you the inside scoop on things to see in Alan Jackson’s “AJ’s Good Time Bar,” located on Broadway in Nashville, which just celebrated its one year anniversary!!
RANDOM FACTS ABOUT AJ’S-Only ARTIST owned bar on Broadway (until Dierks Bentley and Blake Sheltons open!)-Drink menu includes “Alan’s Drink” – Jack & WaterBuilding Facts:– Alan purchased the building on August 22, 2016– The first 2 floors were opened on October 5, 2016– After renovations the 3rd Floor & Rooftop opened on May 12, 2017Each floor has its own “personality” as each floor showcases Alan’s varying interests and hobby’s:– 1st Floor – AJ’s Honky Tonk – Live Country Music– 2nd Floor – G T Bar – Sports Games on various TVs with live acoustic music– 3rd Floor – Hullbilly Bar – Karaoke and live acoustic music– Rooftop – AJ’s Star Bar-Bar is located on Broadway which is also known as the Honky Tonk Highway. As a result, Alan’s 2017 tour was called the “Honky Tonk Highway Tour” to tie in with his new bar. Alan added a stop to his tour after his Nashville show on May 19th when he showed up at AJ’s Good Time Bar and did a surprise performance at the bar (with his 8 piece band!)FIRST FLOOR – AJ’S HONKY TONK

-Hero’s Wall – A few of Alan’s favorite Country singers-Good Time Outfit – Actual outfit Alan wore on the cover of his Good Time Album-Behind Bar – two pair of Boots from Alan’s personal collection. The Red boots were prominently featured in the ‘Chattahoochee’ music video-Alan Jackson Miller Lite Neon–from Alan’s 1992 Tour sponsored by Miller Lite-Various Hatch Show prints and plaques from Alan’s careerSquare Grouper Neon by Tiki Bar – Actual neon from the Square Grouper Tiki Bar in Jupiter, Fl. Given to Alan by the owner of the bar. Alan filmed the videos for both “It’s Five O’Clock Somewhere” and “Long Way To Go” at the Square Grouper. Photos from the “Long Way To Go” video shoot next to Tiki Bar show the Neon in its original location-AJ’s Good Time Bar was originally called ‘The Wheel’ by the previous owners, and the original ‘The Wheel’ neon that hung behind the bar is now displayed above the door to the second floor.-Metal Wheel at the front of the Bar – supposedly was the original crank wheel used for the elevator in the building back when it was a Civil War Hospital-Street sidewalk sign is a life size standup of Alan taken during the ‘Angels & Alcohol’ photo shoot at Marathon Village-First Floor & Second Floor both feature Sweet Tea on Tap!STAIRWELL TO SECOND FLOOR-Showcases all 80 covers of Country Weekly Magazine that Alan appeared on, appearing more than any other artist.-Two Jackets from Alan’s personal collection worn in various photo shoots

SECOND FLOOR – G T BAR-”Merle the Moose” greats everyone as they come off the stairs. “Merle” has been in the Jackson family for years previously residing at the Jackson’s lake house.-Wooden Motorcycle was a gift to Alan from one of his sisters. She had it handmade for Alan years ago as a Christmas gift.-License Plate Wall – Includes several of Alan & Denise’s personal license plates they have had over the years, as well as – at least 1 license plate from all 50 states. (See if you can find the one hung upside down!)-Couch belonged to Alan and previously resided at is Lake House.-Honky Tonk Highway rug – a gift given to Alan at one of his tour dates by the promoter-Pyramid of Cans – a line from Alan’s song “Chattahoochee” – as Alan sings “A pyramid of cans in the pale moonlight” – includes 1 can for every team in the NFL-All jerseys across from the bar are from Tennessee teams, all other jerseys on back wall were all given to Alan over the years when he would play at different sports venues.-Kaw-Liga the Wooden Indian Chief – given to Alan for his birthday by his band, The Strayhorns. Little known fact, the band & crew often refer to Alan as “Chief”.-Various Hubcaps – although not all from Alan’s personal collection – they are all from “American Made” cars-Chevy & Ford tailgates, the two fenders and 1 front end grill are all car parts from Alan’s personal Collection. Before being re-homed at the bar all of these were hung in the garage at Alan’s house-Two Racing suits were previously hung in Alan’s garage at his home. Alan wore one in his video for “Who’s Cheating Who” and the other in a photo shoot for Miller Lite-Take a shot & ride the ‘Yee Hawg’ Pig–an original 1950’s coin operated arcade pig ride – Harley Davidson bicycle from Alan’s personal collection

THIRD FLOOR – HULLBILLY BAR-All Ski’s & fishing poles come from Alan’s personal collection, including his momma’s skis that are hung on back wall by “Southern Comfort Hurricane” Neon-Photo of Alan & his Dad – Daddy Gene, hangs next to the stage-Photo of Andy Griffith “Gone Fishing” – Alan is a huge Andy Griffith Show fan.-‘Hoochie Coochie’ Transom is from one of Alan’s actual classic custom wooden boats (same boat as show on the mural)-Various Boat Show posters are posters that Alan has collected over the years-‘Jackson Fish Camp’ sign came from Alan’s River house referred to as the Fish Camp. – 2 Boat motors from Alan’s personal collection-Center Hill Lake Show Print & Aquapaloosa photo – both were Alan’s lake shows and were only able to be attended by boat or watercraft-Photo of Alan skiing in the ‘Chattahoochee’ Video-Grill/Dash off one of Alan’s old Century boats-Lake Burton sign – from his lake home in Georgia-Mural is a photo taken during the Aquapalooza show of Alan in his custom made 1922 Hacker Reproduction (“Hoochie Coochie”)-Fighting Chair – same chair as featured in the photo of Alan on his “Hullbilly” fishing boat, as well as the deep sea fishing pole hung next to the picture-‘Hullbilly’ Boat Bar – custom made replica of Alan’s Merritt Sportsfish Boat. We flew the one of the actual builders up from Florida to build the boat bar on sight and built to scale as well as being varnished & sealed by the same person that does all the work on Alan’s actual boat.-Various personal photos of Alan fishing – all on his own personal boats.-Standup on the stage is a life-size standup of Alan taken during the photo shoot for Alan’s ‘Freight Train’ album