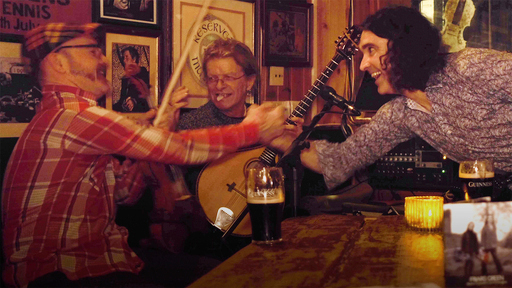 Ahead of St. Patrick’s Day, American fiddler and Nashville regular Casey Driessen is sharing music from a wild night in November, 2019, from McGann’s Pub in Doolin, Ireland. The high energy medley of “Musical Priest / Toss the Feathers / Lucy Campbell’s” was recorded in a corner of the dimly lit pub with two local masters, Uilleann pipes player, Blackie O’Connell and Cyril O’Donoghue on bouzouki.

“It was a fantastic night,” says Driessen. “Cyril and Blackie created endless variations of harmonies and melodies, and often sounded like one instrument. I had some Irish tunes under my belt, but I was still barely holding on at times, and thrilled to just be along for the ride.”

The collaboration is a highlight from Otherlands: A Global Music Exploration, a travelogue of on-location recordings, short films and essays that documents Driessen’s collaborations in Spain, Ireland, Scotland, India, Japan and Finland.

Produced, performed, recorded and filmed by Driessen, the 25-episode video series is paired with Otherlands:ONE, a 13-song recording of collaborations and stories from each encounter. The plan for Otherlands was deceptively simple: Find masters of regional music, and then listen, learn and play. The musicians were just as open and curious. “The collaborations were challenging and inspiring—beautiful, unexpected ideas happen when people of diverse backgrounds come together. And like me, they were willing to open themselves to what a chance meeting might bring.”
“Music is such a passport,” says Driessen. “Even before anything is said, there’s a common ground—we’re musicians.”
Learn more about Blackie O’Connell and Cyril O’Donoghue’s band Dubhlinn here, and may the luck of the Irish be with us.

Music editor for Nashville.com. Jerry Holthouse is a content writer, songwriter and a graphic designer. He owns and runs Holthouse Creative, a full service creative agency. He is an avid outdoorsman and a lover of everything music. You can contact him at JerryHolthouse@Nashville.com
Previous Thomas Rhett Set To Release 5th Album
Next Keith Urban And Mickey Guyton To Host 56TH ACM Awards