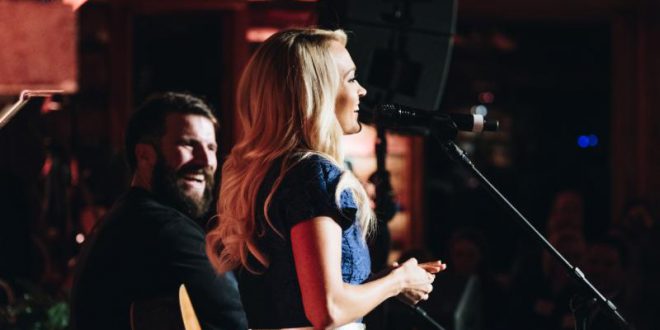 Country stars Carrie Underwood and Sam Hunt joined hit songwriters Zach Crowell, Matt Jenkins and Bryan Simpson to help raise over $630,000 for Mission Lazarus at the inaugural “Songs On A Mission” event at The Mansion at Fontanel Thursday night. The star-studded affair was created with the idea of drawing a parallel between how songwriters work in the background crafting hit songs for artists in the same way Mission Lazarus works in the background to serve the indigenous people of Honduras and Haiti.
The over 200 attendees started the evening touring the amazing Mansion at Fontanel, former home of Country Music Hall of Famer Barbara Mandrell, before gathering for a cocktail in the Pool Atrium. A delicious dinner was followed by performances by the songwriters who told fascinating stories behind their hit songs. Carrie Underwood and Sam Hunt closed out the evening performing songs that have been especially meaningful in their lives, both as songwriters themselves and as a tribute of gratitude to the songwriters whose songs they sing.”
The event came together after Crowell, Jenkins and Simpson visited the Mission Lazarus facility in Honduras last year and decided to host a songwriters in the round event in Nashville. They initially hoped to raise $10,000 for the organization. Crowell reached out to Sam Hunt and Carrie Underwood, artists for whom all three writers have written hits, and asked if they would be willing to participate.
Over $200,000 was raised prior to the event; an anonymous donor offered to match up to $200,000 in donations and another $230,000 was raised Thursday night.
“We were beyond appreciative of the fact that Zach, Matt and Bryan took the time to visit our 2,000 acre ranch in Honduras,” said Jarrod Brown, a Nashville businessman who co-founded Mission Lazarus with his wife Allison, NP. “When they came up with the idea of ‘Songs On A Mission,’ we never dreamed Carrie and Sam would agree to participate. We can’t thank all of them enough for donating their time and talents and for all of the amazing donors making this huge difference in the lives of so many people.”
Nashville-area residents Jarrod and Allison Brown founded Mission Lazarus in 2004 with mission work primarily focused in Honduras and Haiti. As a successful businessman, Jarrod felt called to use his professional skills to help create self-sustaining business opportunities in these countries. Allison uses her healthcare skills to create meaningful programs to impact the health and wellness of individuals Mission Lazarus serves.