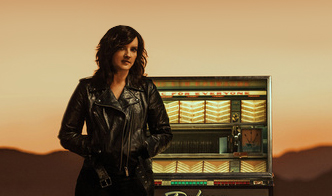 A new version of Brandy Clark’s song “The Past is the Past,” both featuring and produced by special guest Lindsey Buckingham, is debuting today. Listen above.
Of the collaboration, Clark shares, “A few years ago, Lindsey heard a demo of ‘Past is the Past’ and said he wanted to cut it, which felt like such an immense honor. But when I heard he wanted to produce a version of ME singing it, I was FLOORED. Working with him on it was really a pinch myself moment. Another instance for me where I met a hero who did not disappoint. After later recording Your Life is a Record with Jay Joyce, that earlier version of the song didn’t fit the project, but I still loved it and wanted to do something with it. Adding it to the deluxe version just feels right. It’s such a different take on the song than what Jay and I created, and I hope that fans will love it as much as I do.”

The track is from Clark’s new deluxe album, Your Life is a Record (Deluxe), which will be released next Friday, March 5 on Warner Records in celebration of the one-year anniversary of her album, Your Life is a Record. In celebration of the release, Clark will perform a track from the deluxe album on “The Ellen DeGeneres Show” next Wednesday, March 3.
In addition to the new version of “The Past is the Past,” the deluxe edition will feature all eleven songs from Your Life is a Record as well as five additional bonus tracks, including “Remember Me Beautiful,” a song Clark wrote earlier this year as part of NPR’s Morning Edition Song Project. The album will also feature collaborations with Brandi Carlile (“Like Mine” and “Same Devil”) as well as live renditions of two album tracks: “Pawn Shop” and “Who You Thought I Was.”

Moreover, in honor of the album’s anniversary, Clark will perform her first ticketed livestream concert next Saturday, March 6 at 8:00pm ET/7:00pm CT via Mandolin. Tickets for the show are available now with a selection of purchase options, including a limited number of VIP packages with signed merchandise and a virtual meet & greet. Fans will also have the option to add a digital download of the deluxe album to their livestream ticket, to be delivered on release day.

The new release continues a big year for Clark, who is nominated for two awards at the 63rd GRAMMY Awards—Best Country Album (Your Life is a Record) and Best Country Solo Performance (“Who You Thought I Was”)—as well as Outstanding Music Artist at the 2021 GLAAD Media Awards.

Music editor for Nashville.com. Jerry Holthouse is a content writer, songwriter and a graphic designer. He owns and runs Holthouse Creative, a full service creative agency. He is an avid outdoorsman and a lover of everything music. You can contact him at JerryHolthouse@Nashville.com
Previous ACM Award Nominations Announced
Next Leftover Salmon Returns To Compass Records