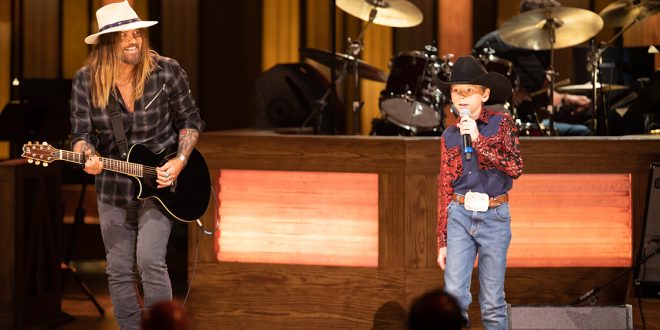 Billy Ray Cyrus appeared on the Grand Ole Opry last Saturday to perform two of his hottest charting #1 songs, “Achy Breaky Heart” and “Old Town Road.”
Atlantic/Big Loud Records artist and internet sensation Mason Ramsey made a surprise appearance with Cyrus to perform “Old Town Road,” the remix version of the song they perform with Lil Nas X and Young Thug. The song has reigned at #1 on the Billboard Hot 100 chart for 16 weeks and is primed to make six-decade history as the longest run at #1 in Billboard history if it reaches week 17.

“17 is my new favorite number! 17 weeks No. 1 Single “Old Town Road.” 17 weeks No. 1 Album Some Gave All. My goal was always to make music that would touch people’s lives around the world,” said Cyrus.

Music editor for Nashville.com. Jerry Holthouse is a content writer, songwriter and a graphic designer. He owns and runs Holthouse Creative, a full service creative agency. He is an avid outdoorsman and a lover of everything music. You can contact him at JerryHolthouse@Nashville.com
Previous Randy Travis Visits Metro Nashville Animal Care & Control
Next Maren Morris Hits The Top Of The Charts