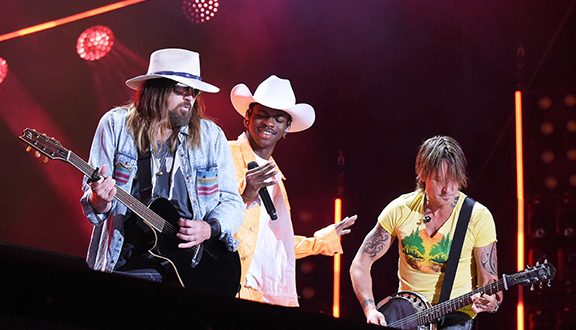 Billy Ray Cyrus is on a roll and is making room on the trophy shelf. After taking home two MTV VMA Moonmen for Song of the Year and Best Direction for Lil Nas X’s “Old Town Road (Remix, featuring Cyrus),” the singer/songwriter learned today he’s nominated in the Musical Event of the Year category with Lil Nas X during the 53rd CMA Awards, being held on November 13 on ABC.

“It’s crazy. It’s like the twilight zone of my life. I flew home from New York, put my Moonmen on the shelf and laid down for a solid 8 hours. I wake up and learn I’m nominated in the Country Music Association’s Musical Event of the Year on a song eliminated by Billboard critics for not ’embracing enough elements of today’s country music,’ ” said Cyrus.

Cyrus and Lil Nas X went on to shatter Billboard Hot 100 all-genre records as the longest-running No. 1 for 19 consecutive weeks.

“For better or worse, I’m Billy Ray Cyrus from Flatwoods, Kentucky. I love country music and I love a great country song. When I heard Chevys and Fords… it struck me as both. I feel like I’m starting my first band and man I’m excited. The single ships September 3rd!” said Cyrus.

On September 8, Cyrus will co-host the Canadian Country Music Association Awards (CCMA®) with Dallas Smith, which airs live on Global from Calgary’s Scotiabank Saddledome at 9 p.m. EST/PST, where he’ll also perform the worldwide premiere of “Chevys and Fords.” Cyrus is the first ever American to be bestowed the honor to host the Canadian Country Music Association Awards.

Music editor for Nashville.com. Jerry Holthouse is a content writer, songwriter and a graphic designer. He owns and runs Holthouse Creative, a full service creative agency. He is an avid outdoorsman and a lover of everything music. You can contact him at JerryHolthouse@Nashville.com
Previous 53rd Annual CMA Award Nominations Announced
Next Wallows Coming To The Cannery Ballroom Sept.4th