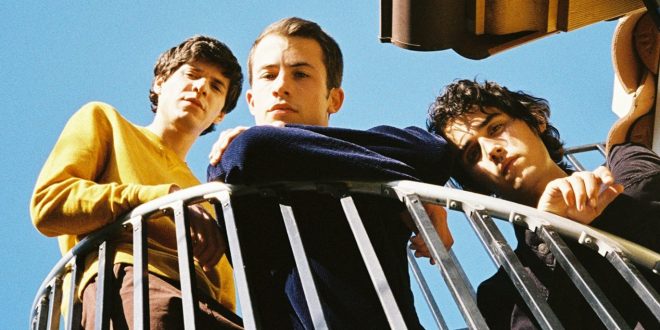 Breakout alt-rock trio Wallows (Braeden Lemasters, Cole Preston, and Dylan Minnette) are starting their U.S. headline tour dates in support of their debut album Nothing Happens, extending their Nothing Happens World Tour. The dates begin September 4th in Nashville and continue through the month. The band will follow up the US headline tour with two dates in London supporting Vampire Weekend at Alexandra Palace on November 13th & 14th.

After spending their teen years honing their songcraft and sharpening their live set, the trio self-released four singles in 2017. “We didn’t have a label or management or anything—we didn’t even have a name when we recorded those songs,” says Lemasters. Eventually calling themselves Wallows (a word whose many definitions include “to indulge in an unrestrained way in something that creates a pleasurable sensation”), the trio drew buzz with “Pleaser”: an urgently catchy track that shot to #2 on Spotify’s Global Viral 50 chart, amassing over 11 million streams on the platform to date.

For Wallows, the release of Nothing Happens marks the realization of one of their most closely held and near-lifelong ambitions. “One thing we’ve said since we were like 14, and first had our minds blown by all these bands who mean a lot to us, is that we’d love to make an album that other people could feel the same way about,” says Preston. “We talked about our debut album so much growing up, and this record really feels like the most honest statement we could make after all these years of working together,” Minnette adds. “We’d love for people to feel that and find their own meaning in the songs, and hopefully get inspired to go out and make something of their own.”

Music editor for Nashville.com. Jerry Holthouse is a content writer, songwriter and a graphic designer. He owns and runs Holthouse Creative, a full service creative agency. He is an avid outdoorsman and a lover of everything music. You can contact him at JerryHolthouse@Nashville.com
Previous Big Year For Billy Ray Cyrus
Next Americanafest Announces Surprise Additional Round of Performers