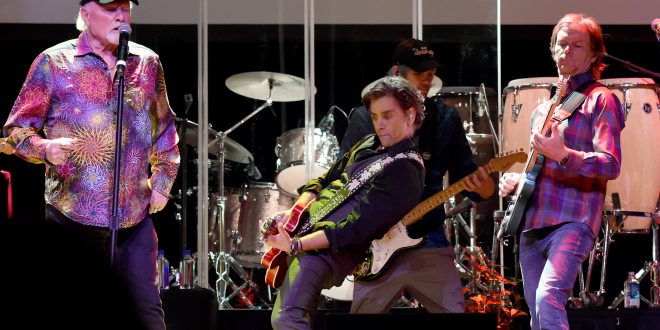 Mike Love, John Stamos and Scott Totten of The Beach Boys in concert at the Ryman Auditorium on February 6, 2022 in Nashville, TN. © Tammie Arroyo / AFF-USA.com

Beach Boys Sing All The Hits At The Ryman

The energetic crowd was a mixture of young and old at the Ryman last Sunday where the legendary Beach Boys performed almost all of their big hits. Beach balls appeared before the show and that kept the crowd entertained until the show started. Enthusiastic fans sang and danced along with every song. John Stamos from Full House joined the band and had Saget printed on his guitar in honor of his good friend Bob Saget. LOCASH also bade an appearance sing their song “Beach Boys.” (see set list below)

The Beach Boys are one of the most critically acclaimed and commercially successful bands of all time, selling over 100 million records worldwide. The group had 36 songs reach the US Top 40 (the most by an American band), with four topping the Billboard Hot 100. The founding members were inducted into the Rock and Roll Hall of Fame in 1988.

You’re So Good to Me

Be True to Your School

Wouldn’t It Be Nice

This Too Shall Pass
(Mike Love song)

Music editor for Nashville.com. Jerry Holthouse is a content writer, songwriter and a graphic designer. He owns and runs Holthouse Creative, a full service creative agency. He is an avid outdoorsman and a lover of everything music. You can contact him at JerryHolthouse@Nashville.com
Previous WATCH: Scotty McCreery’s “Damn Strait”
Next Academy Of Country Music Announces Award Nominees