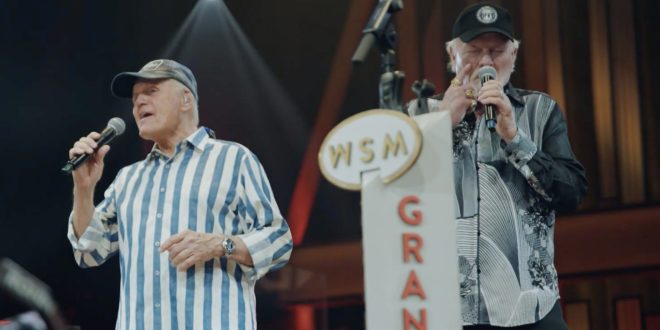 As the ultimate start of the season, LOCASH brought a double dose of good vibrations to the Grand Ole Opry last Friday (5/27) with summer anthem and current single, “Beach Boys,” featuring Mike Love and Bruce Johnston of The Beach Boys. The sold-out appearance welcomed The Beach Boys’ long-awaited debut on the legendary stage and will be featured in a later airing of Opry Live.

“We don’t know if we’ll ever be able to put into words how amazing it was to introduce and perform with The Beach Boys at the Grand Ole Opry. Singing our new single ‘Beach Boys’ with Mike [Love] and Bruce [Johnston] during their history-making Opry debut will forever be one of the top memories of our career,” shares LOCASH. “Seeing a sold-out Opry crowd all wearing leis, and on their feet singing every word will never be forgotten. And also surprising our buddy Jacob – a recent child cancer survivor – and welcoming him onstage for ‘I Love This Life’ was an incredible way for us to end such a special moment together. Standing beside him in the most coveted circle in Country music with a big smile on his face really did remind us all how powerful music really is.”

Launching their history-making performance with No. 1 high-flying smashes “One Big Country Song” and “I Know Somebody,” LOCASH split the bill with The Beach Boys for the second half of the night’s programming. Hand-placing about 5,000 flower leis on the seats ahead of the sunny takeover, LOCASH and The Beach Boys pumped straight positivity through their highly anticipated appearance, and joined together onstage for “Beach Boys” and The Beach Boys’ iconic “Fun, Fun, Fun.” The Beach Boys also celebrated their first-time set with legacy songs including “Don’t Worry Baby” featuring billed performer Lorrie Morgan, “Kokomo,” and “Good Vibrations.” Further adding to the memorable moment, LOCASH welcomed a young fan and recent child cancer survivor named Jacob onstage to close out the monumental show with a mass sing-along with The Beach Boys to LOCASH’s breakout “I Love This Life.”

The Beach Boys are currently on their “60 Years of the Sounds of Summer” 2022 Tour celebrating their 60th anniversary. On June 17, they’ll release a newly remastered and expanded edition of The Beach Boys career-spanning greatest hits collection, Sounds Of Summer: The Very Best Of The Beach Boys. The expanded Sounds of Summer features 24 new mixes including two first-time stereo mixes, plus 22 improved stereo mixes enhanced by today’s digital stereo extraction technology. The collection is available to PREORDER now in a variety of formats, including a super-deluxe version and a remastered single disc that boasts the original 2003 release.

Music editor for Nashville.com. Jerry Holthouse is a content writer, songwriter and a graphic designer. He owns and runs Holthouse Creative, a full service creative agency. He is an avid outdoorsman and a lover of everything music. You can contact him at JerryHolthouse@Nashville.com
Previous Danny Burns Releases “Someone Like You” Featuring Tim O’Brien
Next Billy Dean Returns With First Album In A Decade