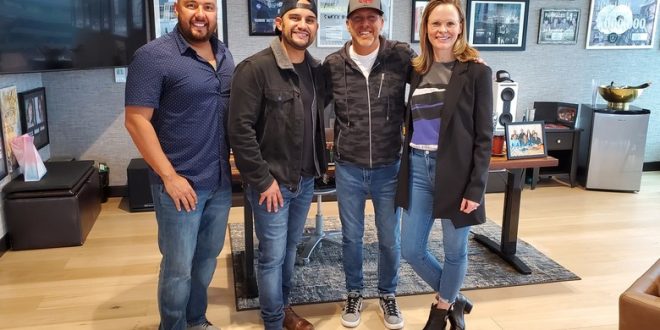 BBR Music Group announces the signing of former police officer, Texas chart-topper, and bilingual recording artist Frank Ray. Ray will release his first song as a signed artist, “Streetlights” on June 11. Inspired by his Mexican heritage, the new track, penned by Ray, is a sexy smooth cross between Country and Latin music.

Music was always a passion for Frank which he pursued part-time until he had the opportunity to open for Keith Urban, performing for several thousand — and something clicked. Immediately, after a decade on the force as a full-time police officer, he decided to leave his old life behind and embark on the journey to pursue music full-time (watch the moment above). In the three short years since, he has racked up two No. 1 singles and three Top ten singles on Texas Country Radio, become a staff songwriter, landed Frank Rogers as his producer and much more.

“I’m incredibly excited and humbled to join the BBR Music Group family! I’ve dreamt of this moment since I was a kid and I couldn’t be more grateful to have it manifest with a team who’s as diverse and forward thinking as any label I’ve ever seen,” says Frank Ray. “Their collaborative efforts inspire the vision I’ve had for myself in country music! I can’t wait to see what we can accomplish together.”

“Frank wasn’t an artist pitched through the Nashville machine. I came across him, like many fans, through a new artist playlist—when I heard his vocal and unique musical direction, I immediately needed to know more,” said Sara Knabe, VP A&R BBR Music Group. “What was clear from the jump is that Frank has a defined artistry, a winning work ethic and a fresh perspective, missing from our genre. I am proud to welcome him to our roster of artists.”

Music editor for Nashville.com. Jerry Holthouse is a content writer, songwriter and a graphic designer. He owns and runs Holthouse Creative, a full service creative agency. He is an avid outdoorsman and a lover of everything music. You can contact him at JerryHolthouse@Nashville.com
Previous Dierks Bentley Announces ” Beers On Me Tour”
Next Grand Ole Opry Going Full-Capacity May 14