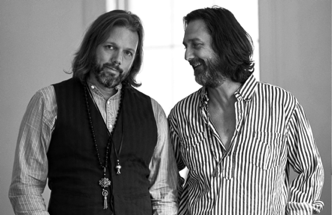 Under the moniker Brothers Of A Feather, The Black Crowes, Chris and Rich Robinson, announce today a rare opportunity to see them perform stripped down versions of some of their classic songs. The intimate outing kicks off in London and makes a stop in Nashville at the Basement East on February 25th. Limited tickets for these intimate performances go on sale today.

This promotional run coincides with the 30-year anniversary of the release of the band’s quintuple platinum debut album, Shake Your Money Maker which was released on February 13, 1990. The band will be celebrating the release of that album with a sprawling 47-date tour this summer, playing the album in its entirety as well as all of the other hits that have made the band one of the best loved, and most enduring, in the history of rock ‘n’ roll.

All of this celebration may come as a surprise to fans who know the Robinson brothers were estranged for most of the 2010’s. Howard Stern was the first to reveal the unlikely reunion of brothers. “I’d believe Jesus would be back before my guests today,” Stern joked on air. The brothers proved they were better than ever with a candid interview and staggering full band performances of fan favorites ” Hard To Handle” ” Jealous Again” and ” She Talks To Angels.”

In 1990, when journalists were lamenting the death of rock, as cheesy pop and hair metal dominated the charts, Atlanta’s Black Crowes gave the genre a swift and much needed kick in the ass with Shake Your Money Maker. Fueled by singles “Jealous Again,” “Twice As Hard,” “She Talks To Angels,” and the break-through cover of Otis Redding’s “Hard To Handle,” the band immediately took the rock world by storm, topping Rolling Stone’s “Best New American Band Readers Poll” in late 1990.

The Black Crowes went on to release eight studio and four live albums, selling in the tens of millions along the way; they sold out shows around the world; had legendary guitarist Jimmy Page join as a member; got kicked off a tour with ZZ Top for insulting the sponsor; got screwed by bad record deals; got married and divorced, fought amongst themselves and against the rest of the world. In other words, they’ve done everything a legendary rock group should do. 2020’s massive reunion and tour produced by Live Nation is sure to further cement the band’s legacy as one of the best and most loved rock bands of all time.

Music editor for Nashville.com. Jerry Holthouse is a content writer, songwriter and a graphic designer. He owns and runs Holthouse Creative, a full service creative agency. He is an avid outdoorsman and a lover of everything music. You can contact him at JerryHolthouse@Nashville.com
Previous 10 Questions With Rising Pop Star GAYLE
Next Chris Bandi To Make His Grand Ole Opry Debut