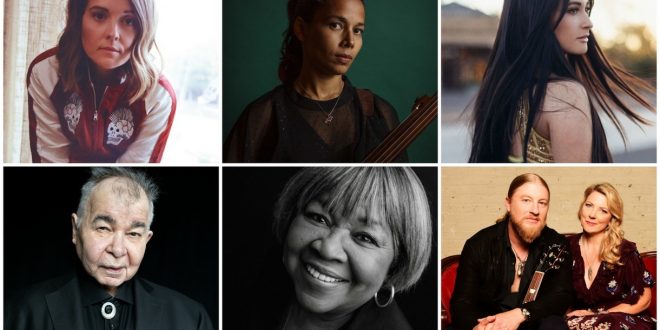 The Americana Music Association announced the nominees for its 18th annual Americana Honors & Awards this afternoon from the rehearsals of “Mavis & Friends: Celebrating 80 Years of Mavis Staples,” which you can watch   here. This year’s nominations were revealed by previous Duo/Group of the Year winners The Milk Carton Kids with special guest Mavis Staples, who received a nod in the association’s coveted Artist of the Year category. A full list of categories and nominees for the Americana Music Association’s® 18th annual Americana Honors & Awards is below:

ALBUM OF THE YEAR:“To the Sunset,” Amanda Shires, Produced by Dave Cobb “The Tree,” Lori McKenna, Produced by Dave Cobb “The Tree of Forgiveness,” John Prine, Produced by Dave Cobb “Walk Through Fire,” Yola, Produced by Dan Auerbach ARTIST OF THE YEAR:Brandi Carlile Rhiannon Giddens Kacey Musgraves Mavis Staples DUO/GROUP OF THE YEAR:I’m With Her Our Native Daughters Tedeschi Trucks Band The War and Treaty EMERGING ACT OF THE YEAR:Jade Bird J.S. Ondara Erin Rae The War and Treaty Yola INSTRUMENTALIST OF THE YEAR:Chris Eldridge Eamon McLoughlin Chris Powell Michael Rinne SONG OF THE YEAR:“By Degrees,” Mark Erelli, Rosanne Cash, Sheryl Crow, Lori McKenna, Anais Mitchell & Josh Ritter, Written by Mark Erelli “Mockingbird,” Ruston Kelly, Written by Ruston Kelly “People Get Old,” Lori McKenna, Written by Lori McKenna “Summer’s End,” John Prine, Written by Pat McLaughlin and John Prine The winners of each category will be announced during the Americana Honors & Awards on Wednesday, Sept. 11, 2019 at the historic Ryman Auditorium in Nashville, Tenn. The celebrated program is the hallmark event of AMERICANAFEST®, which runs from Sept. 10-15, 2019. Every year, the Americana Music Association honors distinguished members of the music community with six member-voted annual awards and with Lifetime Achievement Awards, which will be announced leading up to Americana music’s biggest night. “I am thrilled that our membership has chosen to highlight such an incredible slate of talent,” said Jed Hilly, Executive Director of the Americana Music Association. “Each of these musicians has constantly pushed the creative envelope, as evidenced by their musical contributions from this past year. That said, it’s no surprise that these nominees and their art have resonated within our community.”

Music editor for Nashville.com. Jerry Holthouse is a content writer, songwriter and a graphic designer. He owns and runs Holthouse Creative, a full service creative agency. He is an avid outdoorsman and a lover of everything music. You can contact him at JerryHolthouse@Nashville.com
Previous Randy Travis Releases Memoir
Next Sinatra Bar To Open In Downtown Nashville 2020