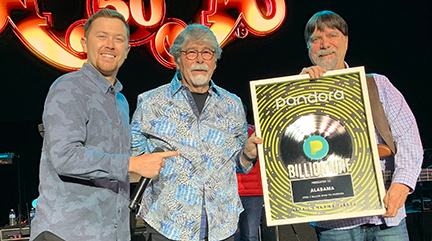 ALABAMA was surprised with a major honor last weekend. On Friday, December 9 at the Berglund Center Coliseum in Roanoke, VA, ALABAMA founding members Randy Owen and Teddy Gentry were interrupted mid-show by opening act Scotty McCreery who presented them with the Pandora Billionaire plaque. The honor commemorates over two billion ALABAMA streams on the streaming service.

“The Pandora plaque was a nice surprise,” says Gentry. “We thought a million plays was a very big deal but two billion plays of our songs puts it over the top. We appreciate Pandora and thanks for the award.”

“We are so thankful to our fans and listeners for playing our music for over 50 years,” adds Owen. “Two billion is a big number. That means they like our music and want to hear it again and again. Thank you Pandora for the award.”

The music of ALABAMA will now be played on Pandora’s Country Billionaires station.

Music editor for Nashville.com. Jerry Holthouse is a content writer, songwriter and a graphic designer. He owns and runs Holthouse Creative, a full service creative agency. He is an avid outdoorsman and a lover of everything music. You can contact him at JerryHolthouse@Nashville.com
Previous WATCH: Little Big Town’s “Rich Man”
Next Craig Campbell Adds City Councilman To His List Of Talents