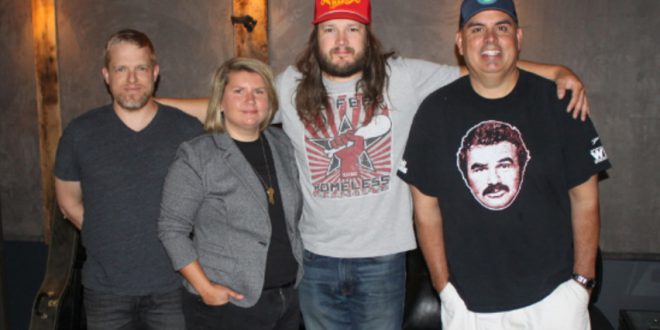 “I couldn’t be more excited about signing with Average Joes. Never have I been surrounded by such a supportive and skilled group of people. The trust they have placed in me to create music in an environment unfettered by mainstream norms and the status quo is inspiring, and should be to anyone in the industry,” said Wakefield.

“Adam’s style and artistry is undeniable, and his spirit is infectious. We’re excited to welcome him to the AJE family,” commented Shannon Houchins, CEO/President, Average Joes Entertainment.

“‘Cheap Whiskey and Bad Cocaine’ is a romanticized account of being a new (and/or unsuccessful) singer/songwriter in Nashville,” said Wakefield. “It’s about embracing failure and making the best of things. Scotty Murray’s guitar work on this one is killer.”

Wakefield added, “Like so many tunes, ‘Dry Days’ just started as a guitar/vocal — I thought it would end up as a straight-ahead Southern Rock tune, but we put the organ and cowbell in there and it took a groovy little trip to the French Quarter. It’s a simple song about being too broke to buy booze, weed or cable tv. You know, the typical vices.”

Whether it’s country, jazz, bluegrass or soul, Wakefield has the ability to draw fans in with his exceptional talent both as a singer and songwriter. As a performer, Wakefield is an established pianist and recognized as a versatile musician having honed his skills over the past decade.

Following last year’s extended tour filling in for The Steeldrivers’ frontman, Gary Nicols, Wakefield is ready to hit the road this summer with his own band. Tour dates are quickly filling up and will be announced soon.

Music editor for Nashville.com. Jerry Holthouse is a content writer, songwriter and a graphic designer. He owns and runs Holthouse Creative, a full service creative agency. He is an avid outdoorsman and a lover of everything music. You can contact him at JerryHolthouse@Nashville.com
Previous Pilgrimage Partners with Blackberry Farm
Next Here’s Your Chance To Play At Pilgrimage!