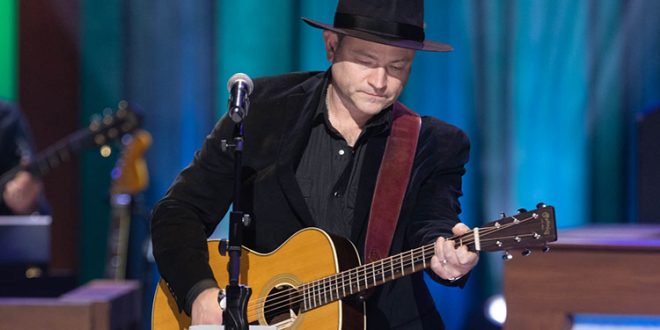 Country singer and songwriter, Adam Hood, made his Grand Ole Opry debut on Saturday night. The Saturday night double-header featured sets from Opry members Darius Rucker, Bill Anderson, Jeannie Seely, Lauren Alaina and Dustin Lynch. While Hood has helped pen songs for superstars like Miranda Lambert, Little Big Town, Riley Green, The Oak Ridge Boys and Cody Jinks, Adam performed two original songs, “Way Too Long” off his 2014 album Welcome to the Big World and “Harder Stuff” off his latest record, Bad Days Better. “I wish it wasn’t over! I didn’t want it to end. The amount of support from family, friends and fans was staggering! The folks at the Opry are the best in the business, and that stage sounds just like you would think it does. It’s gonna take a while to come down from this one!” said Hood.

WSM radio host, Mike Terry, said of Adam’s boisterous audience, “I’m wondering how many members of the audience you bought tickets for. It was amazing. We’ve had artists make their appearance for the first time and you can tell that there’s a following when they come out. But that’s the biggest applause that I can recall hearing ever.”

Hood’s Opry debut is on the heels of his fifth studio album Bad Days Better which came out mid-September. The album peaked in the top 10 on the Americana Albums Chart. “Harder Stuff” featuring Miranda Lambert peaked at No. 12 on the Americana Singles chart and peaked at No. 8 at Texas Radio. To stay up to date with Hood and his tour dates, please visit adamhood.com

Music editor for Nashville.com. Jerry Holthouse is a content writer, songwriter and a graphic designer. He owns and runs Holthouse Creative, a full service creative agency. He is an avid outdoorsman and a lover of everything music. You can contact him at JerryHolthouse@Nashville.com
Previous WATCH: Nicolle Galyon’s “Younger Woman”
Next Flatland Cavalry Drops “Songs to Keep You Warm” This Friday