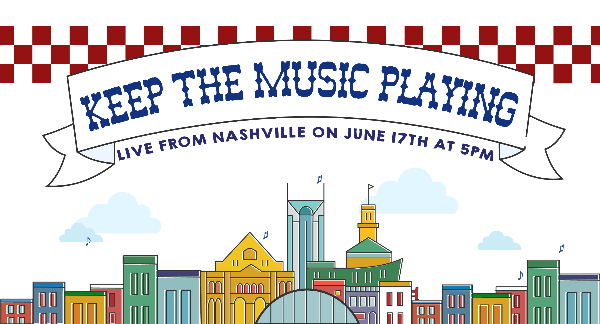 Acme Radio Live has announced Keep The Music Playing, a star-studded live stream fundraiser sponsored by Jack Daniel’s benefiting Music Health Alliance airing June 17th. Utilizing live and pre-recorded performances from a smattering of famous and infamous Nashville locations—The Ryman Auditorium, Bluebird Cafe, Acme Feed and Seed, and Dino’s, to name a few—Keep The Music Playing continues Nashville’s long-seeded history of stepping up to help in times of need. Through the Spotify COVID-19 Music Relief Project, Spotify will match all donations to Music Health Alliance, dollar for dollar, up to a collective total of $10 million. Keep The Music Playing will air on acmeradiolive.com as well as facebook and youtube channels at 5 pm Central on June 17th and donations can be made here starting today.

“When COVID-19 really started ramping up and it became obvious to us that a lot of the events and plans we’d made for the summer would have to be canceled, our team hopped on a call to immediately start problem-solving,” says Acme’s Director of Marketing, Tricia Higbee. “As disappointed as we were, what was really bothering us the most was being unable to provide that platform for all the amazing artists and personalities that go into making our events what they are. We didn’t want to take away that opportunity from voices who need to be heard, so we quickly decided to pivot.” Utilizing Acme Radio Live’s already up-and-running in-house production team to create world-class content for the event, Keep The Music Playing presented itself as the natural solution for the conundrum at hand. “Our mission with this event is simple, raise as much money as possible for the Music Health Alliance while also offering people around the world a glimpse inside Nashville, if only through a screen, to show how we’re physically distancing, but socially joining together to keep the music playing in Music City.”

Music editor for Nashville.com. Jerry Holthouse is a content writer, songwriter and a graphic designer. He owns and runs Holthouse Creative, a full service creative agency. He is an avid outdoorsman and a lover of everything music. You can contact him at JerryHolthouse@Nashville.com
Previous Listen: Brantley Gilbert Releases Uplifting “Hard Days”
Next Mavericks To Release Their First Spanish Language Album