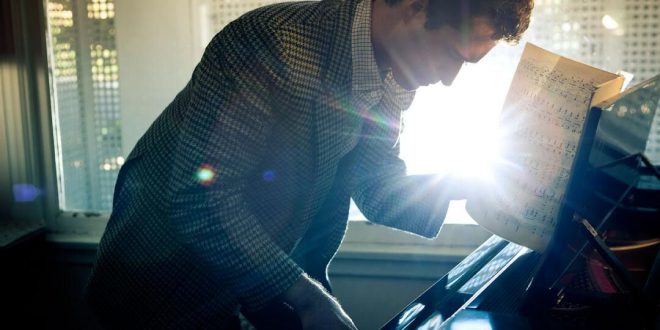 So Aaron coming from an acting family, what is it that first drew you to music?

I’m sure it was my parents! They are both so incredibly musical. They have a childlike wonder which I really appreciate. Even though music is their business, they’ve never been anything but joyous about it. How can a child not want to be part of that?

Your self-titled album was released a long time ago and “Wry Observer” was just released a few months ago, What has changed in your life between then and now.. Is there a big difference in writing between these.

Oh, God. Everything. The self-titled album came as my man-child days were ending and I was looking around thinking…oh, I have to grow up and it is going to be painful to take my inventory. The “Wry Observer” album is about where I went next, and the last ten years. That process of shedding skins and what I learned and what I still need to learn. Also, about all the characters I met along the way. It’s a chronicle of the inventory taken over the last ten years.

It has already received a lot of praise in the media, that must feel pretty special?

It makes me feel a little less like I’m involved with a very expensive hobby and a bit more like I’m a professional with something of value in the world.

Was “Wry Observer” born in Nashville, New York, or out on the road?

Written/conceived in New York, born in Nashville. Sputnik Sound and the people we assembled there (Brad Lindsay, T.J Elias) helped me find this album so much.

I don’t have a favorite. I put everything into each song. This is my most honest album. I only ever wince when I know I took a shortcut lyrically or musically–I didn’t do that once on this album. That’s why I took my time before committing to recording.

What’s a song you may have written ‘just for you,’ on it, but has had a lot of response from listeners?

Wow. How do you know about this?? What a crazy question (because it’s totally accurate and such an ‘inside baseball’ insight.) You must be a songwriter! Anyway, that song would be “Brooklyn At Dawn.”  I wrote it in one pass with made up lyrics that stuck. That only happens once out of every 200 times I try it–full song, improvised. What it facilitates is a lack of being guarded. I think people are attracted to the vulnerability on the song.

What would eight-year old Aaron say to you now about your life and career?

Eight-year-old Aaron: Woah, I like all this music. What’s it like to play a stadium?? Now Aaron: Oh, kid, it’s awesome! (never played a stadium)

Now for the food!

Good, my best friend is a chef (Benjamin Osher), and I worked at some top LA restaurants!

Do you prefer to cook at home and have a favorite go-to recipe or just go out to eat?

I prefer to cook at home, but of course a fine dining experience or an awesome food truck find is pretty good livin’! It really depends. Home cooking can be romantic, cheaper of course (haha), and some nice downtime meditation. Eating out is like a victory lap for me –if I’ve earned the right, then I’m happy to partake.

L.A. has the best produce, no doubt. New York is more multicultural in closer proximity. Nashville is eccentric unto itself. You can find things in New York you can find in L.A., but Nashville is Nashville, full stop.

One food you sneak a little extra of when no one is looking?

Which three things are always in your home refrigerator?

Guac, Chicken, and Rice Milk. You can take the boy out of California but…

Any food you just won’t touch?

I don’t do creamy anything–blech.

Favorite restaurant of all time?

What food fuels your morning?

PB and J sandwich and coffee every morning.

What can your fans look forward to this year? Another album, music videos, more acting?

I live in Tarrytown, NY.  Nashville was a wonderful place to record my album and my band lives there.  Here’s what my Producer and Guitar Player Brad Lindsay has to say…

Best BBQ:  Nick Bearden, our bass player, says Martin’s is the best.  And he knows.

Coffee: Fido, maybe. The Post? Crema, too. I really liked the old Red Bicycle on Nolensville.  Those are full-experience answers, not solely coffee answers.

Winners or Losers:  Sorry, folks.  The answer is Mickey’s.

Best place for date night: First I like hit the Mapco; then the rest of the night is spent in our living room after the kids are asleep.

[Aaron Here: Brad loves to pretend he is a monk.  Believe me, the dude wanted to get out and about more than I did!]

Tacos: There are no tacos in Nashville.  Pardon the CA snobbery.

Steak: Pick up something nice from Porter Road Butcher, or Turnip Truck, then have Aaron Gleason cook it up for you at my house.