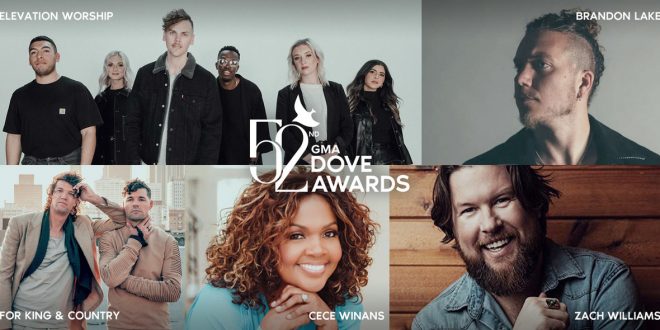 The Gospel Music Association has announced the nominees for the 52nd Annual GMA Dove Awards. Top nominations include Steven Furtick with ten (10) nominations, Chris Brown with nine (9), Wayne Haun with eight (8), seven (7) nominations each for Elevation Worship and Brandon Lake, six (6) to for KING & COUNTRY and five (5) nods to CeCe Winans, Ed Cash, Tiffany Hammer (Hudson) and Zach Williams. Voted on by the GMA Professional Membership, this year’s nominees were chosen from over 4,600 submitted entries and include a wide range of creativity and artistic integrity in both artist and non-artist categories.

“We are thrilled to welcome back an in-person Dove Awards this year and equally excited about our impressive list of nominees,” says GMA President Jackie Patillo. “As we continue to celebrate the immense creativity and diversity within our community, we’re looking forward to an awards program this year’s nominees deserve.”

Voting for the final winners will run August 19th through August 26th. The GMA Dove Awards are happening live and in person in Nashville, TN, October 19th, 2021. A limited number of tickets and Fan Experiences are still available. The broadcast will air exclusively on TBN, Friday, October 22nd, 2021 8:00p.m. ET and then again at 10:00p.m. ET.

Below is the list of nominations announced during today’s livestream. For the complete list of nominees, visit doveawards.com.
For official social media assets, click here. Images of top nominees can be found here. Logos for the 52nd Annual GMA Dove Awards are located here.

Contemporary Gospel Recorded Song of the Year
“I Got It” – Pastor Mike Jr.
“joyful” – Dante Bowe
“Never Lost” – CeCe Winans
“Speak To Me” – Koryn Hawthorne
“Touch from You” – Tamela Mann

Music editor for Nashville.com. Jerry Holthouse is a content writer, songwriter and a graphic designer. He owns and runs Holthouse Creative, a full service creative agency. He is an avid outdoorsman and a lover of everything music. You can contact him at JerryHolthouse@Nashville.com
Previous LISTEN: Austin Burke’s “Wet Dream”
Next Governor Bill Lee Declares August 18 ‘Charlie Daniels Day’