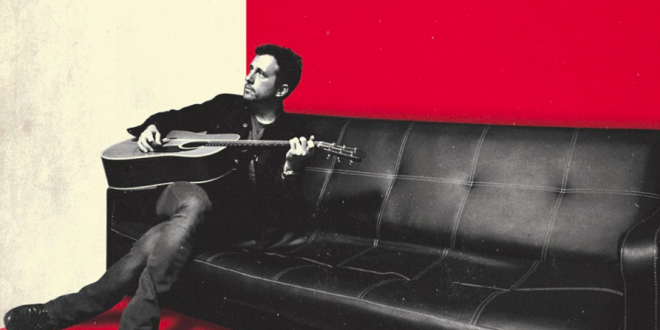 Will Hoge returns with his 10th studio album, “Anchors.” The album is comprised of songwriting that is raw and authentic and showcases his unique style of music and strong vocal aptitudes. This album will immediately go into your list of favorites. In the midst of his hectic schedule, Will sat down with us to talk about his latest album, musical upbringing, and favorite places to eat.

What first drew you to music?

My father’s record collection. He has a really great love of music, so I had every great record made between 1964 and 1978 literally alphabeticalized and at my disposal. All of the early Beatles stuff really hit me hard. The other ones that really stand out are The Temptations, James Brown, and Buck Owens.

“Small Town Dreams” was released in 2015 and “Anchors” comes out August 11, What has changed in your life between then and now.. Is there a big difference in writing between these.

Maybe not a big difference, but there are some differences. With “Small Town Dreams” I was still in the middle of my publishing deal with BMG so it was writing for not just me, but for other people as well. So it wasn’t, “let’s write something that’s great and I will record it, it was more “let’s write something and we will see what happens with it.” So “Small Town Dreams” is kind of a mix of those two things. They are all songs that I have written and feel great about, but this record is more back to me.

Was “Anchors” born in Nashville or on the road?

It was written in Nashville. I did not write much on the road on this one.

What made you want to self-produce the tracks on Anchors, was that not scary and a big risk?

A little bit. I did a few records before on my own but got away from that on “Small Town Dreams.” I intended to do “Anchors” with Ray Kennedy, but he got called to do the new Steve Earle record at the last minute. They have worked together and have made some records that are life changing records for me. I felt like it was one of those universal alignments. It was time for me to go back and do it again. The band was in place, I found Sound Emporium Studio, which is my fav studio, and I had David my engineer already lined up. So we did it. It was a little scary but it all worked out.

That’s tough, I can’t tell yet. Some of that changes as the record gets released, it’s interesting to watch. Even the ones you think a certain thing about, they take on a whole different life in front of a crowd or once people hear the record it becomes different. I really just look forward to seeing what each song becomes once the record is out.

What’s a song you may have written ‘just for you,’ but has had a lot of response from listeners?

“Seventeen” seems to be pretty high on that list. “Young As We Will Ever Be” and “Cold Night in Santa Fe.” It’s early so it’s hard to tell, but those have resignated pretty heavily from the start.

What would eight-year old Will say to you now about your life and career?

I think he would be in total awe of it. To be honest, 28 year old Will would still be. I say thanks out loud as often as I can. If you can rewind far enough and you think about ten years ago, I would have almost cut off a foot to be where I am now. So it’s important. Eight year old me would be excited.

Mitchell’s Deli- Asian flank steak sandwich, the pork burger at Rudie’s, the tempeh tacos at The Wild Cow, and
fried chicken at Swett’s.

Is there a place you haven’t ate you have been dying to go?

So many! I have not been to Etch or Husk yet.

One food you sneak a little extra of when no one is looking?

Which three things are always in your home refrigerator?

Do you prefer to cook at home or go out to eat?

I really love both. I like to cook at home, but I have to make myself do it more. It’s just so easy in Nashville now to say let’s go out to eat. So I enjoy both!

After playing a late show, what is your go-to food?

I love anytime we can get Mediterranean kabobs or Greek food

Is there anything that you don’t enjoy eating?

What is your favorite spice/ingredient?

Martin Luther King Jr. and whatever he wants to eat.

ABOUT WILL HOGE:
“I hit a wall,” says Will Hoge. “I was doing the best touring of my career and I had a great, steady gig writing songs, but I was falling out of love with being in a band. I had to figure out what was next.”

For Hoge, what came next was a quest to reclaim the joy and the magic that had drawn him to music in the first place. He let his band go and hit the road for roughly a year of solo shows, crisscrossing the country by himself with just a guitar and a keyboard. He felt rejuvenated by the freedom and began writing material that reenergized him, that made him feel like a kid falling in love with rock and roll all over again. Those songs ignited a dormant flame somewhere deep within his soul, and now they form the bulk of Anchors, his strongest and most nuanced album to date.

Recorded with an all-star band comprised of drummer Jerry Roe (Emmylou Harris & Rodney Crowell, Darius Rucker), bassist Dominic Davis (Jack White, Wanda Jackson), and guitarists Brad Rice (Son Volt, Ryan Adams) and Thom Donovan (Lapush, Ruby Amanfu), the album is a prime showcase for Hoge’s soaring, gritty vocals, as well as his remarkable gift for crafting complex characters with real emotional depth and plainspoken profundity. Over the course of eleven tracks (including one with special guest Sheryl Crow), Hoge weaves elements of vintage country, literate folk, and heartland rock into a passionate, genre-busting masterpiece, one that offers an unflinching portrait of the messy challenges of adulthood and the ways in which we persevere (or don’t) through hard times.

Beginning with the release of his acclaimed 2001 debut, Carousel, Hoge established himself as a masterful songwriter and performer as well as a critical favorite, with Rolling Stone comparing him to Bob Seger and John Mellencamp and NPR praising his “sharp, smart, passionate rock ‘n’ roll that seems to exist out of time.” He built up a loyal fanbase the old fashioned way, maintaining a steady studio output and a relentless touring schedule of more than 200 shows a year, including bills with the likes of My Morning Jacket, the Black Crowes, and Drive-By Truckers, in addition to festival slots from Bonnaroo to Austin City Limits. In 2012, the Eli Young Band hit #1 on the Billboard Country chart with their Platinum-selling recording of Hoge’s song “Even If It Breaks Your Heart,” earning Hoge nominations for CMA, ACM, and GRAMMY Awards. Soon he was performing everywhere from the Grand Ole Opry to The Late Show with David Letterman, his music was soundtracking a high-profile Chevy truck campaign, and he’d signed a major publishing deal.

When the inspiration ran dry, though, Hoge took a gamble on himself and walked away from it all in order to pursue the kind of art that truly moved him, to make something that mattered. If Anchors is any indication, it was a safe bet indeed.