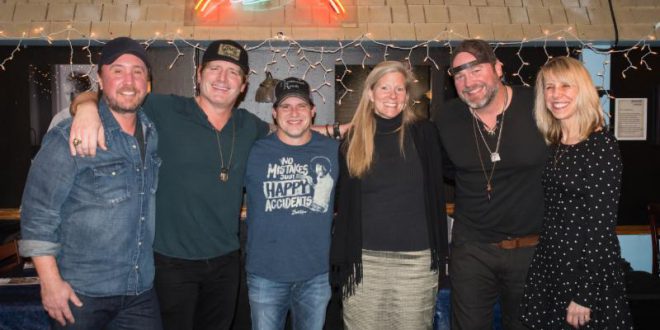 The 25th Annual ’Alive at the Bluebird’ Wraps

The 25th Annual Alive at the Bluebird concert series benefiting Alive Hospice hosted one last sold-out show for 2018 this week, over a month after the initial series ended. The Lee Brice-led round featured Jerrod Niemann, Rob Hatch and Lance Miller and was a make-up show after a mid-January snow storm forced a rare cancellation.

“The annual support for ALIVE from the songwriting community is truly humbling,” said Anna-Gene O’Neal, Alive Hospice President/CEO. “This group of songwriters not only rescheduled but had secured a new date within days of the original show. We can’t say thank you enough!”

The four traded stories about writing songs, recording songs, life on the road, individual histories with the famed Bluebird Café and acknowledging the loving work of Alive Hospice.

The 25th Annual Alive at the Bluebird concert series featured over 130 artists and songwriters performing ­30 shows to benefit Alive Hospice. The month-long run featured the best of the best in the songwriting community, crossing genres with artists like Amy Grant, Clint Black, Kim Carnes and a special 35th anniversary performance by Kathy Mattea. The series wrapped up with an extraordinary show featuring Garth Brooks.

Funds raised from this annual series support the mission based services of Alive including hospice care, grief support and community education on end of life topics.

Music editor for Nashville.com. Jerry Holthouse is a content writer, songwriter and a graphic designer. He owns and runs Holthouse Creative, a full service creative agency. He is an avid outdoorsman and a lover of everything music. You can contact him at JerryHolthouse@Nashville.com
Previous Kalie Shorr To Make Grand Ole Opry Debut
Next Colton Swon Of The Swon Brothers’ Marries Caroline Glaser