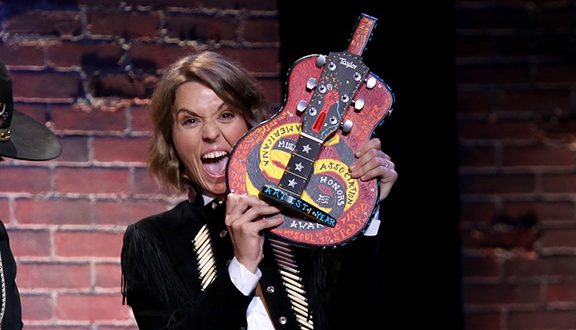 The Americana Music Association celebrated distinguished members of its community tonight and revealed the winners of the 18th annual Americana Honors & Awards at the historic Ryman Auditorium. A generation-bridging group of musical innovators garnered coveted awards, including Brandi Carlile(Artist of the Year), John Prine (Album of the Year and Song of the Year), I’m With Her(Duo/Group of the Year), The War and Treaty (Emerging Act of the Year) and Chris Eldridge (Instrumentalist of the Year).
Wrapping up a milestone year with her GRAMMY-winning record, “By the Way, I Forgive You,” Carlile took home an Americana trophy for Artist of the Year. 2003 Americana Lifetime Achievement (Songwriting) honoree Prine secured two of the evening’s top honors with Album of the Year for “The Tree of Forgiveness,” produced by Dave Cobb; and Song of the Year for  “Summer’s End,” written by Pat McLaughlin and Prine.
I’m With Her ( Sarah Jarosz , Aoife O’Donovan and Sara Watkins ) won Duo/Group of the Year after an extensive touring year anchored by their critically acclaimed album, “See You Around.”
Also honored by the Americana music community were The War and Treaty. The dynamic husband-and-wife duo was named Emerging Act of the Year following a prolific 2018 thanks to their debut ” Healing Tide ,” which landed them on notable year-end lists including NPR Music and Rolling Stone. Punch Brothers veteran Eldridge was recognized with his first Americana Award in the category of Instrumentalist of the Year.
For nearly two decades, the Americana Honors & Awards program has provided a unique platform for commemorating the best and brightest musicians in the Americana music scene while showcasing once-in-a-lifetime performances. After a soul-stirring opener by Our Native Daughters , the evening featured a captivating rendition of “Angel From Montgomery” by John Prine and Bonnie Raitt as well as an homage to Bob Dylan’s duet with Johnny Cash from “Nashville Skyline” by Rodney Crowell and Joe Henry . Paying tribute to the legendary songwriting duo Felice & Boudleaux Bryant , The Milk Carton Kids delivered an entrancing take on The Everly Brothers classic “Sleepless Nights.”
Throughout the night, attendees were treated to performances by Carlile, Elvis Costello,I’m With Her, Rhiannon Giddens , Lori McKenna , Delbert McClinton , Buddy & Julie Miller , Maria Muldaur , Mumford & Sons and Amanda Shires ; plus, Mark Erelli withShawn Colvin, Josh Ritter and McKenna.
Envelope-pushing newcomers Jade Bird , Ruston Kelly , J.S. Ondara , Erin Rae , The War and Treaty and Yola also left it all on the famed Ryman stage, demonstrating how they’ve captivated listeners and gained appreciative followers with their unique artistry.
In recognition of her nearly seven-decade career as an enduring pillar of hope and justice, Mavis Staples accepted the inaugural Inspiration Award from John Seigenthaler and Civil Rights activist and Freedom Rider Ernest “Rip” Patton . Previously announced Lifetime Achievement honors were accepted by Elvis Costello (Songwriting), presented by T Bone Burnett ; Giddens and posthumously Frank Johnson (the inaugural Legacy of Americana Award), presented by H. Beecher Hicks III ; Delbert McClinton(Performance), presented by Jack Ingram ; and Maria Muldaur (Trailblazer), presented by Raitt.
The show came to a memorable close with a soulful rendition of “I’ll Fly Away” led by Staples in the iconic style of The Staple Singers.
“Every year, I look forward to this special night when the community celebrates one another for their well-deserved accomplishments,” said Jed Hilly, Executive Director of the Americana Music Association. “I’m proud to say there are no other awards shows like this in the business and am absolutely humbled by the caliber of talent who gather under one roof.”
For the second year, GRAMMY-nominated duo The Milk Carton Kids hosted the night’s festivities, which Emmylou Harris lovingly calls “the shining star of Nashville and music everywhere.” Americana stalwart Buddy Miller returned as reigning musical director with an Americana All-Star Band featuring Brady Blade , Ian Fitchuk , Jim Hoke , Shannon McNally , Dirk Powell , Don Was and the incredible McCrary Sisters backing many of the night’s performers.
2019 Americana Honors & Awards Winners and Honorees:
Album of the Year: “The Tree of Forgiveness,” John Prine, produced by Dave Cobb

Artist of the Year: Brandi Carlile

Duo/Group of the Year: I’m With Her

Emerging Act of the Year: The War and Treaty

Instrumentalist of the Year: Chris Eldridge

Legacy of Americana Award, presented in partnership with the National Museum of African American Music: Rhiannon Giddens and Frank Johnson

Music editor for Nashville.com. Jerry Holthouse is a content writer, songwriter and a graphic designer. He owns and runs Holthouse Creative, a full service creative agency. He is an avid outdoorsman and a lover of everything music. You can contact him at JerryHolthouse@Nashville.com
Previous Buddy Jewell To Perform Classic On Facebook
Next Brantley Gilbert And Wife Welcome Second Child